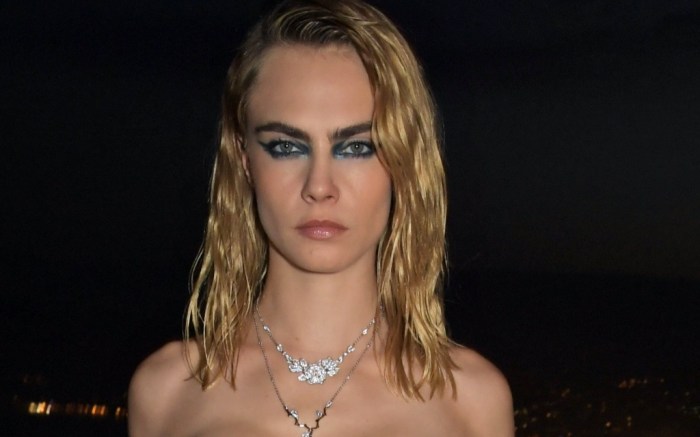 Cara Delevingne brought slick style to the Cannes Film Festival yet again — this time, at an intimate sunset dinner hosted by Monot. The model was joined by an array of stars wearing designer Eli Mizrahi’s slick dresses and bodysuits, including Winnie Harlow, Kat Graham, Indya Moore and Cindy Bruna.

The “Paper Towns” actress posed on the balcony at Villa Bagatelle, both solo and alongside friends like Mizrahi, Moore and Harlow. For the occasion, she wore a full Monot outfit consisting of a strapless white bandeau crafted in sharp triangular shapes. Complementing the daring top was a matching column skirt, which featured a back slit to allow for easier movement. Delevingne’s ensemble was finished with two glistening diamond necklaces, adding a dash of glamour to her edgy evening attire.

When it came to shoes, Delevingne boosted her look with a set of nude Balmain sandals — similarly to a navy pair she donned at the Festival’s celebratory dinner on Tuesday evening. On this occasion, the star’s unreleased Uma style included wide buckled ankle and thin toe straps atop lightly squared soles. Finishing the satin pair with a slick edge were metallic gold stiletto heels, totaling 3.75 inches in height. The pair complemented Delevingne’s neutral outfit while elevating it with a party girl-worthy edge.

Sandals like Delevingne’s add a slick finish to any look, thanks to metallic hues and minimalist shapes. Styles with stiletto heels and supportive ankle straps have particularly grown in popularity, whether in flat or platform-soled styles. This year’s Cannes Film Festival has seen similar styles by Rene Caovilla, Saint Laurent and Dolce and Gabbana worn by Kylie Minogue, Virginie Efira and Sharon Stone, among other stars, as well.