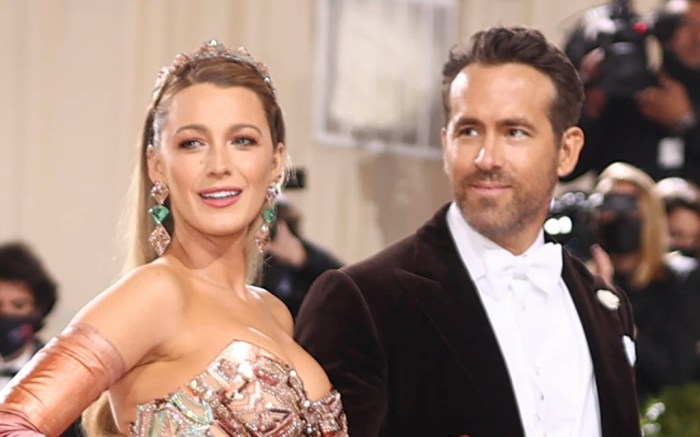 Blake Lively is a Met Gala regular known for always dressing to the night’s theme in opulent and breathtaking style. For this year’s fashion spectacle tonight in New York, the 34-year-old actress — who is co-chair of this year’s event — donned a gawk-worthy diamond and copper gown that took elegance to a whole new level. And that’s even before the star debuted her on-carpet outfit transformation.

For the first Monday in May festivities, Lively wore a long, fitted Versace gown with a structured bodice, a high empire waist, and a subtle mermaid skirt. The New York City-inspired dress was decorated with intricate copper, gold and blue-green beading and embellishment, which was meant to mimic the art-deco look of the iconic Empire State Building. When Lively first arrived on the carpet, she wore an elegantly wrapped copper bow around her waist which lead into a brushed copper train.

Mid-carpet, the stunning actress unfurled the bow to reveal a blue-green train, which mirrored the look of oxidized copper. Needless to say, the gown’s draping and aged-copper look were reportedly inspired by the Statue of Liberty, with the train also having the same color and constellation detail as the ceiling of Grand Central Station in NYC. For shoes, Lively wore gold Christian Louboutin’s “Marchavekel” platform stiletto heels with a knot detail across the toes. Of course, the footwear choice is no surprise given her relationship Louboutin and her history of wearing the brand.

Wearing her long blond hair spilling down her back, Lively wore a crown in her hair in another tribute to Lady Liberty. The star accessorized with statement art-deco earrings. Lively also wore opera-length copper gloves with the look, which transformed to include a blue-green hue along with her dress. She was joined by her husband, Ryan Reynolds, who looked dapper in a tuxedo and dress shoes.