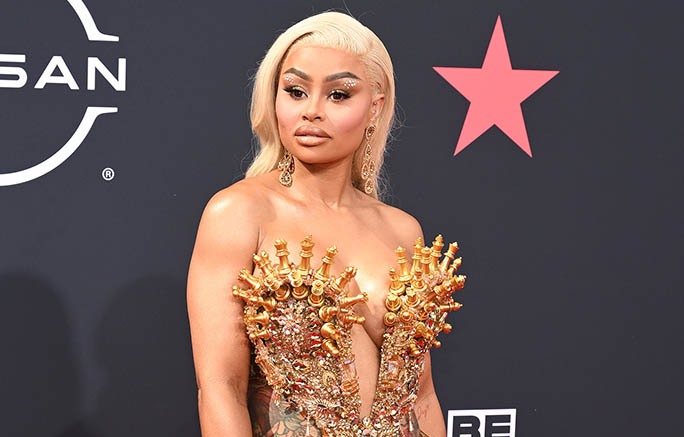 Blac Chyna made a striking arrival at the 2022 BET Awards held at the Microsoft Theater in Los Angeles on Sunday. Taraji P. Henson will host the biggest night in Black culture. The star-studded event will also feature performances by Lizzo, Chance The Rapper, Chloe Bailey, Latto, Jack Harlow, Mary J. Blige, Lil Kim and many others.

Blac Chyna is among the many faces to step out for the eventful evening. The media personality gave major goddess vibes as she hit the red carpet in a gold bustier top, which had chess pieces and embellished elements and beading near the hemline. She paired the eye-catching garment with a metallic skirt that had ruched waistline, extreme thigh-high slit and modest train.

The reality star swept her blond tresses on the side and styled it in loose waves. Blac Chyna added sultry makeup and accessorized with chandelier earrings and glittering cuff bracelets.

Rounding out the star’s look was a pair of gold sandals. The high heels wrapped tightly around her ankles and included a pointy outsole with sequin and studs on the back and on the counter. The shoe style sat atop on a thin stiletto heel.

The BET Awards celebrate the achievements of musicians, actors, athletes, and more throughout various entertainment fields. The first BET Awards took place in 2001 to celebrate Black culture and Black excellence. Taraji P. Henson is the host of this year’s show with performances by Lizzo, Latto, and Jack Harlow. Leading nominations include Doja Cat with six nods, Ari Lennox, and Drake with four nods each.