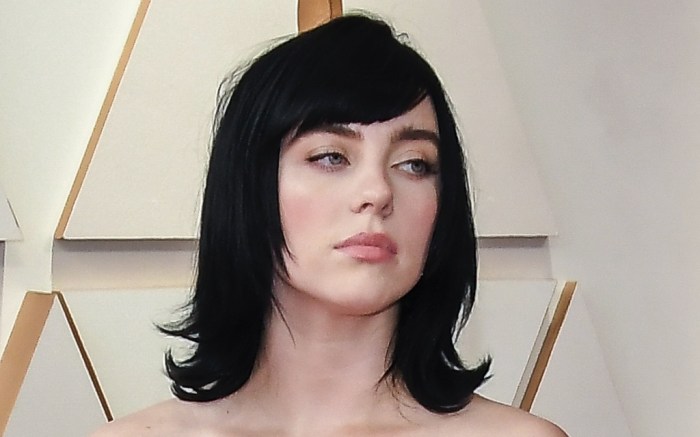 Billie Eilish merged her two signature styles for a statement-making moment tonight at the 2022 Oscars at the Dolby Theater in Los Angeles, prior to performing during the ceremony.

The Grammy Award-winning musician hit the red carpet in a ruffled black gown by Gucci. Merging her recent aesthetic choices — vintage glamour and oversized silhouettes — the gown featured large allover textured ruffles in a wide silhouette. The piece gained a dash of elegance from an off-the-shoulder silhouette as well. Eilish accessorized with antique Fred Leighton diamond rings and earrings shaped like stars, adding a burst of celestial glamour.

When it came to shoes, Eilish gave her look a rebellious edge with Demonia Cult’s platform boots. Though they weren’t fully visible beneath her dress’ large skirt, the pair featured black uppers and rounded toes — as well as ridged platform tiered soles that totaled at least 5 inches in height. The pair boosted Eilish’s look with a touch of grunge — contrary to the many high heels that stars wore during the occasion.