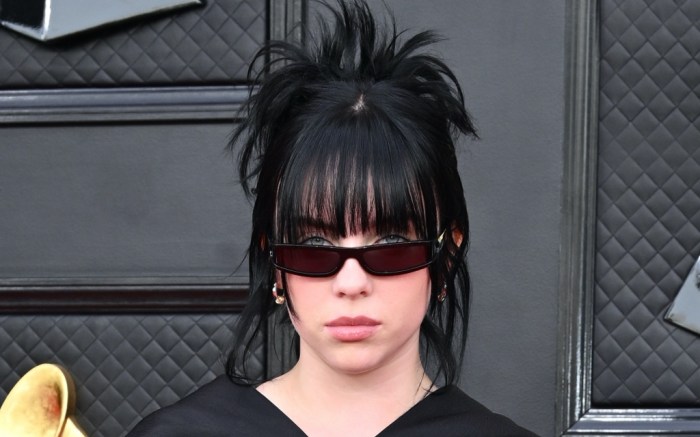 Billie Eilish brought goth aesthetics to the future in Las Vegas at the 2022 Grammy Awards on Sunday.

The Academy Award-winning musician arrived on the red carpet in an oversized Rick Owens coat, hailing from the designer’s Fall 2022 menswear collection. The outerwear, which included long sleeves, a sharp collar and asymmetric hem, was designed to look like an oversized suit jacket draped across her front.

The piece was worn over a matching top and shorts, as well as a draped skirt with a thigh-high slit. Eilish finished the look with angular skinny sunglasses, gold huggie earrings, a delicate chain bracelet and layered rings.

When it came to shoes, Eilish continued her futuristic aesthetic with a pair of chunky boots. Her calf-high style appeared to feature black nylon sock-like uppers worn over black socks. Completing the pair were exaggerated rubber soles with a mix of rounded and squared shapes, adding to the edge of Eilish’s look.

However, this wasn’t Eilish’s only look of the evening. During the ceremony, the singer performed “Happier Than Ever” with brother Finneas in a setup designed to look like an upside-down house; the siblings later emerging from it, continuing their performance drenched in indoor rain. The award-winning musician wore black trousers with a custom Willy Chavarria T-shirt for the occasion. The black short-sleeved top featured an orange print of the late Foo Fighters drummer Taylor Hawkins, who passed away last week.