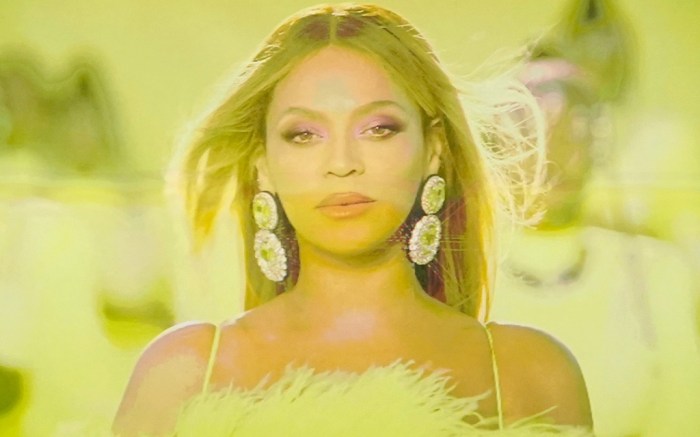 Beyoncé took to the stage for her first live performance in two years at the 2022 Oscars — with an introduction by Serena and Venus Williams, no less.

Performing via a livestream played at the Dolby Theatre, the Grammy Award-winning singer completed a remote performance of “Be Alive,” which she sang for the soundtrack of “King Richard.” Her ensemble for the occasion, coordinating with her backup dancers and the tennis court setting, featured a custom tennis ball-green David Koma dress. The asymmetric sleeveless piece included a gauzy draped minidress with a feathered neckline and thin straps, complete with a trailing flared left leg. The right — featuring a thigh-high hem — was accented with a sparkling garter. Beyonce boosted her look’s glamour with matching gloves, diamond bracelets and large post statement earrings.

Cementing the former Destiny’s Child member’s look was a set of matching green heels. The pair appeared to feature pointed toes with a wide ankle strap for added security. Though her heels were largely not visible, Beyoncé looked to Amina Muaddi for her footwear. The singer’s high heels created a monochrome moment that was both bold and punchy.