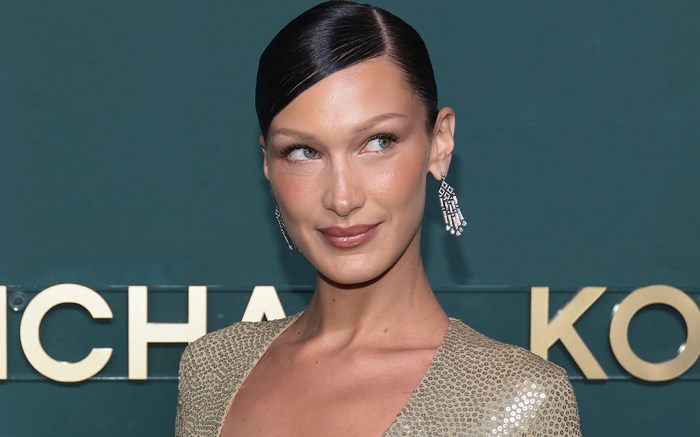 The outfit featured a long sleeve with a plunging neckline and a cascading a-line skirt. The sequined fabric was gathered inwards towards a central point around midway on Hadid’s waistline, cinching up the model’s silhouette. The Swarovski ambassador mixed metals, accessorizing simply with a chunky silver ring and dangling diamond earrings.

For footwear, Hadid opted for gilded gladiator-style sandal heels secured in place with thin crisscrossing straps that climbed up the former “Model of The Year’s” calves, followed by thicker straps crossing over the tops of her feet. The gold sparkling shoes from DSquared2 were also accompanied by thin stiletto-style heels, around 3 to 4 inches tall, that made the tall runway model even taller.

The Golden Heart Awards annually celebrate and raise funds for the charity God’s Love We Deliver, in partnership with Michael Kors. The 2022 gala, held at the Glasshouse in New York City and hosted by Billy Porter, honored Jessica Alba, Huma Abedin, Bella Hadid, and Karen Pearl.