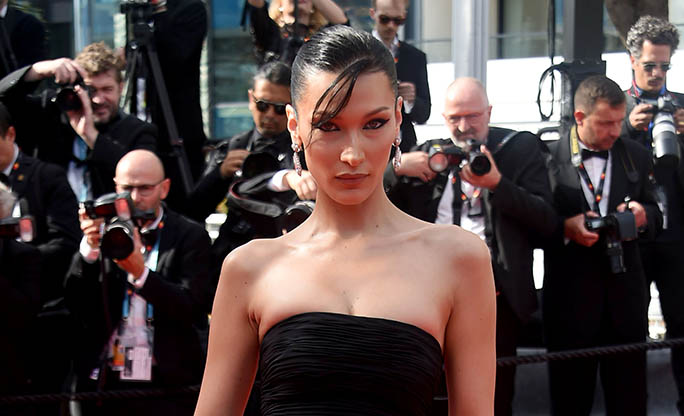 Bella Hadid showed off her fashion credentials as she hit the red carpet for the premiere of “L’innocent (The Innocent)” during the 75th annual Cannes Film Festival in France today.

The supermodel exuded chic glamour as she arrived in a sleek and classy black Versace gown. The strapless number included a billowy, satin sash that hung from her waistline. The garment also had a modest, puffy train. Notably, Gianni Versace himself designed the gown for Austrian soprano and mezzo-soprano, Helga Dernesch, for a performance of the opera Salomé at Teatro alla Scala in Milan, Italy, in 1987.

To keep things minimal, Hadid styled her signature brunette tresses in a bun and let a piece of her bangs frame her face. She accessorized with dainty earrings and diamond rings. Sharp winged eyeliner and a soft neutral pout was her makeup of choice.

For footwear, the media personality followed through with a monochromatic aesthetic by slipping into a pair of black pumps. The shoe style peeked out under her floor-length gown and featured a triangular pointed toe with a sharp stiletto heel. Pointy pumps remain as one of the most popular and timeless shoe styles due to its luxe and durable construction.

Click through the gallery to see more celebrity arrivals on the red carpet at Cannes Film Festival 2022.