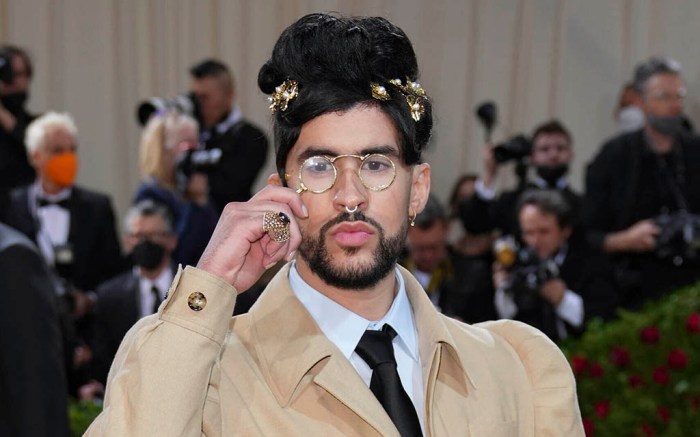 Many celebrities were exploring what American fashion and gilded glamour meant to them at the 2022 Met Gala on Monday in New York. One of those entertainer who did so in striking style was Bad Bunny.

Bunny, otherwise known as Benito Antonio Martínez Ocasio, also wore a white button-down top under the coat that peeked out just above the collar.

On his feet, Bunny wore a tan and white dress shoe. The rapper wore a black tie and placed gold flowers in his quaffed hairdo.

The style is very fitting of the Gilded Age, the star exploring a more traditionally feminine-inspired style for his updo. The jacket is regal thanks to the balloon sleeves and almost mimics a leg of mutton sleeve popularized in the mid to late 1820s before it was traded in for a more subtle style. The look certainly hits the mark in terms of the theme just as well as the hair, making for one of the standout looks of the night.