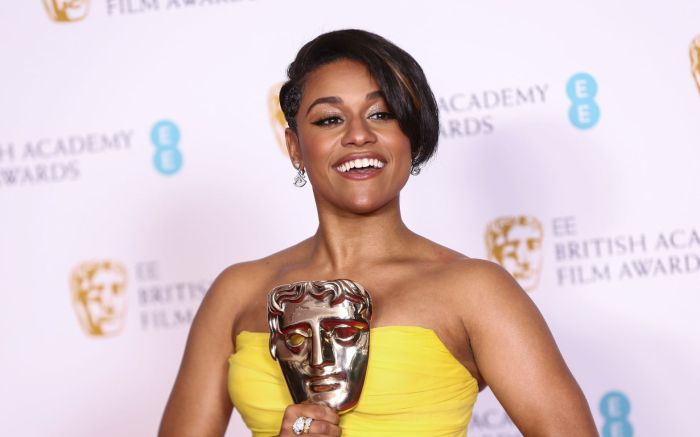 Ariana DeBose is celebrating in style today in London after winning a BAFTA for best supporting actress, an honor for her role as Anita in “West Side Story.”

The star arrived on the red carpet looking stunning in a yellow corset dress by Oscar de la Renta that had a slit running up the thigh. The dress was adorned with red, bedazzled flowers, cinched to the side for a draped silhouette. The burgundy in the actress’ dress was mirrored in her shoes, DeBose opting for a pair of sandals to finish things off.

DeBose kept her hair short in a side-swept bob and wore minimal jewelry, save for some tiny dangly silver earrings. The dress is a reminder that bold is best. There’s sparkle and movement and the dress has a flattering fit. DeBose looks divine, made even better with a winning smile.

“West Side Story” features a star-studded cast, including Rachel Zegler, who was on the carpet in a sequined Celine dress.

Take a look at some of DeBose’s best style moments.

See more stars on the red carpet at the 2022 BAFTAs.