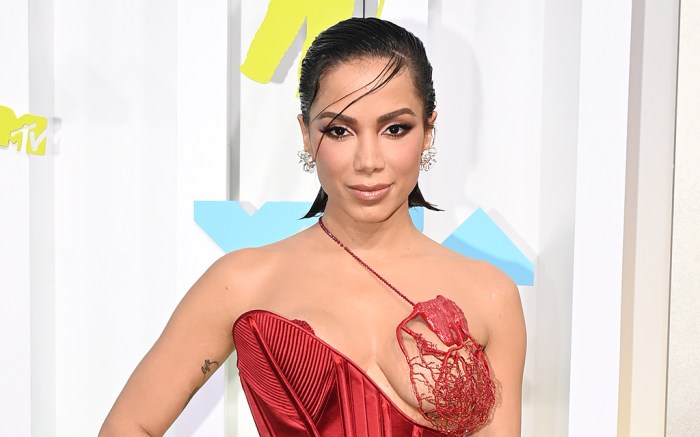 Anitta attended the 2022 MTV VMAs red carpet tonight in New Jersey embracing a high-fashion red deconstructed gown from Schiaparelli. The Brazilian singer went big, and what better event to do so?

The risky ensemble featured a sharp corseted asymmetrical bustier that brought the waist of the garment inward, offering shape to the sleek silhouette. Draped daintily over her shoulders sat an intertwined red web of structured material that provided the “La Loto” singer more coverage, while the velvety skirt of the dress cascaded downwards, fitted with a short side slit.

The skilled dancer worked the avant-garde garment like a pro, slipping on black tights underneath the skirt of her dress, effectively bringing the outfit together.

Anitta popped on statement silver accessories that included a geometric arm cuff, three-dimensional earrings, and rings that sparkled brilliantly under the bright camera flashes. The 29-year-old superstar slicked back her short brown tresses, taking out strands to frame her face, while her makeup lived in the realm of peachy tones topped off with a glossy nude lip.

Taking a chance, Anitta wore dark red strappy metallic platforms with a sky-high heel that lifted the actress to new height. The shoes barely peeked out from behind the lengthy skirt, but overcame the garment thanks to their eye-catching shine and impressive height.