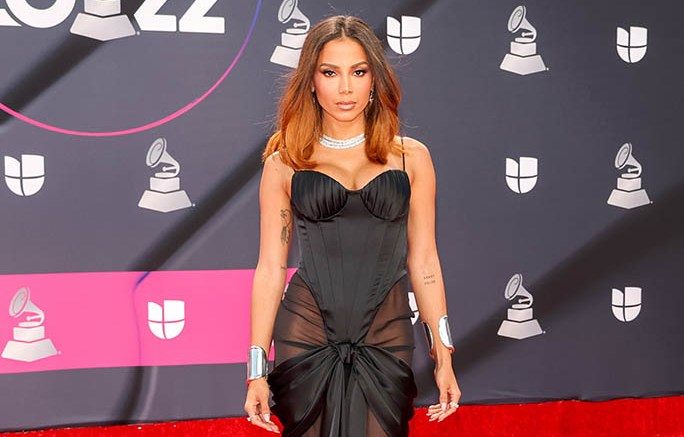 Anitta turned heads while arriving at the 23rd annual Latin Grammy Awards held in Las Vegas on Thursday. The Brazilian superstar was one of the hosts at the ceremony, which celebrated the best musical releases and recognized outstanding achievements in the Latin music industry.

Taking a daring approach to style with edgy elements, Anitta appeared in a black gown by Mugler. The top of the garment had a plunging, ruched corset top. While the sheer skirt featured a large ruffled detail at the center and a modest train.

To amp up the glam factor, the “Boys Don’t Cry” singer accessorized with dainty drop earrings, layered diamond choker necklaces and oversized silver cuff bracelets. Anitta parted her hair in the middle and styled it straight. As for makeup, she went with a soft smokey eye and nude pout.

The “Envolver” songstress completed her look with a pair of strappy platform sandals. The silhouette had a chunky outsole and sat atop a thick block heel.

The 2022 Latin Grammy Awards celebrated the best musical releases and recognized outstanding achievements in the Latin music industry. Held on Nov. 17 in Las Vegas, the ceremony was hosted by singers Anitta, Luis Fonsi, Thalia and Laura Pausini. Marco Antonio Solís, was honored with the Latin Grammy’s Person of the Year Award and Bad Bunny lead the night with ten nominations. Rosalía also received the award for Album of the Year and 95-year-old singer Angela Alvarez accepted the award for Best New Artist.