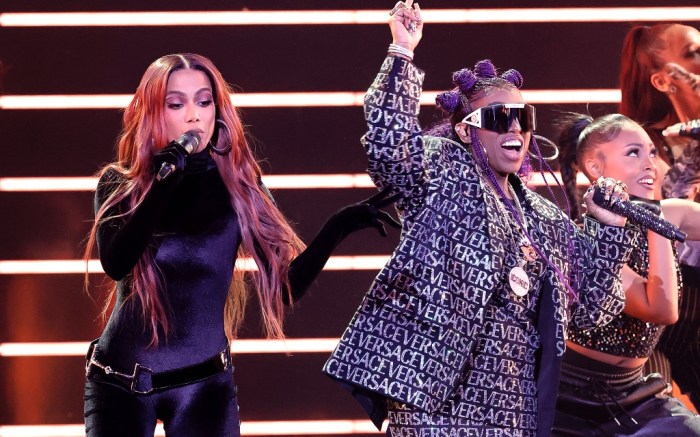 Anitta took her signature slick style to the stage for a special performance at the 2022 American Music Awards tonight.

While onstage at Los Angeles’ Microsoft Theater, the musician danced and sang her songs “Envolver” and “Lobby” — the latter featured Missy Elliott, who came out in a surprise cameo during the set.

For the occasion, Anitta wore a slim-fitting black velvet catsuit, complete with a high neckline and long sleeves ending in matching gloves. Her ensemble was layered with a low-slung patent leather belt buckled with a shiny horse bit. Metallic hoop earrings completed her outfit.

When it came to shoes, Anitta remained sleek in a set of heeled boots. Her style included knee-high black uppers with pointed toes, finished with thin 4-inch stiletto heels and sparkling allover dark crystals for a dynamically glamorous finish.

Elliott herself also made a statement while onstage, wearing a black jacket, top and trousers by Versace that were covered in the brand’s silver lettering. Her attire was finished with Versace’s shield sunglasses, as well as numerous layered chain necklaces, bracelets, rings and wide silver hoop earrings.

The AMAs honor the year’s top achievements in the music industry — and claims the honor of being the largest fan-voted awards show in the world. The 2022 ceremony, hosted by Wayne Brady on Nov. 20 in Los Angeles, will feature a range of performances by Carrie Underwood Imagine Dragons, David Guetta and Anitta. The evening will also include a musical tribute to Lionel Richie — winner of the event’s 2022 Icon Award — by Charlie Puth, Stevie Wonder and Ari Lennox, as well as a performance by Pink in honor of the late Olivia Newton-John.