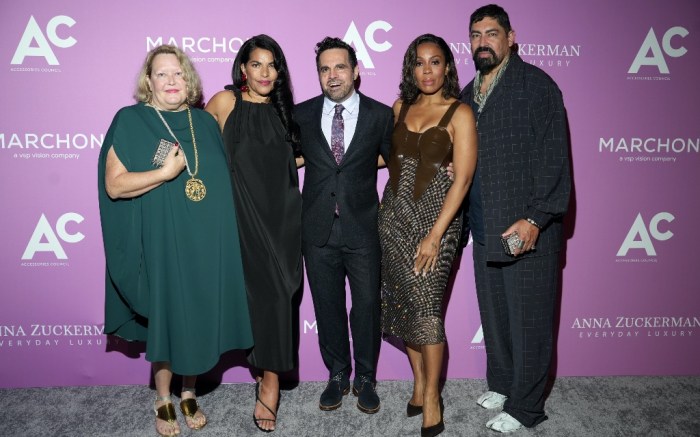 “And Just Like That…” made a return to the spotlight on Monday evening at the 2022 Accessories Council Excellence (ACE) Awards. For the occasion, the HBO Max series‘ costume designers, Molly Rogers and Danny Santiago, were given the Influencers Award at the ceremony.

While presenting with co-stars Sarita Choudhury and Mario Cantone at the 26th annual event on Monday night, Karen Pittman gleamed in a chocolate brown Christopher Kane dress. Her sleek Fall 2022 number included a structured leather bodice and slim-fitting midi-length skirt covered in sparkling crystals. Round gold, white and red post earrings, as well as a wrapped gold beaded bangle and pointed-toe Gianvito Rossi pumps, completed her ensemble for an edgy and artistic look.

Choudhury went for a chic appearance, stepping out in a silky black gown with a high gathered neckline and large thin knotted bow. Glittering red and green beaded post earrings shaped like flowers gave her look a feminine flair. Completing her outfit were sleek black sandals with thin asymmetric straps.
Cantone, meanwhile, was dapperly dressed in a charcoal and white-speckled wool suit, complete with a purple floral tie and navy suede chukka boots for tonal pops of color.

Rogers and Santiago earned the Influencers Award for their work on “And Just Like That…”. The continued “Sex and the City” series starring Sarah Jessica Parker, Cynthia Nixon and Kristin Davis, reprising their original “SATC” characters in their 50’s. The show’s costumes went viral each week since the series’ premiere in December 2021, from Manolo Blahnik’s iconic Hangisi pumps — popularized by the series’ 2008 film — to Birkenstock slides and Parker’s colorful Valentino Couture gown.

Discover the biggest fashion moments from “And Just Like That…” in the gallery.