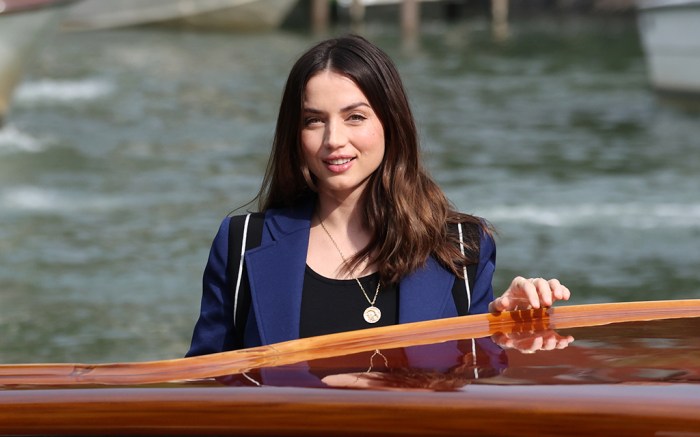 Ana de Armas arrived at Hotel Excelsior via boat during the 79th Venice International Film Festival in Venice, Italy on Sept. 7. The “Knives Out” star suited up in a cobalt blue set and winding heels, prepping for her red carpet appearance.

The Cuban and Spanish actress wore a smart-looking blue blazer fitted with golden buttons, which she paired with a plain black shirt tucked neatly into her matching blue shorts also adorned with the gilded hardware. Armas accessorized sparingly, slipping on a silver pendant necklace and a handful of dainty rings.

Flattering her feet, the thespian strode through the streets of Venice in Gianvito Rossi gladiator sandal heels in black with straps that wound up the star’s calves. Often defined by long straps that wrap around the ankle and up the leg for security, strappy sandals are a popular choice with shorter dresses and other silhouettes that showcase legs.

Armas will be starring in the upcoming Netflix psychological biography film “Blonde” written and directed by Andrew Dominik which will premiere at the festival. Adapted from the 2000 biographical fiction novel of the same name, the film is an exaggerated take on the life of famed actress Marilyn Monroe. The movie has already received rave reviews.