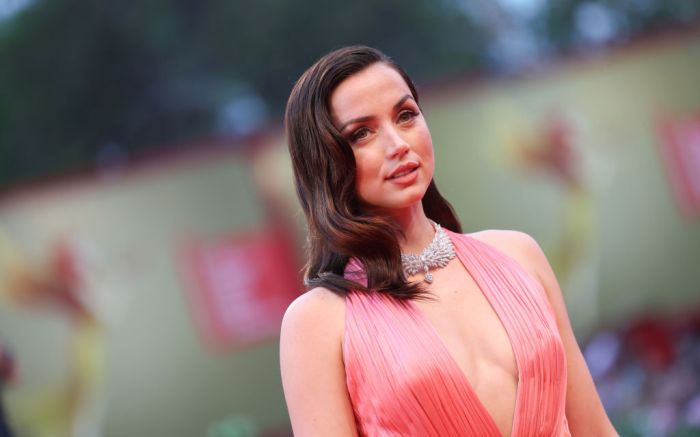 Ana de Armas made a stunning entrance for the premiere of “Blonde” at the Venice Film Festival. The actress stars as Marilyn Monroe in the Netflix film, which will release later this month on Sept. 28 on the streaming platform.

Armas arrived on the carpet in an ethereal pink Louis Vuitton gown, entailing a tied arrangement across its bodice, plunging neckline, a pleated design, and a train element. Her bright accessories featured a scintillating choker-like necklace, a dazzling bracelet, and stud earrings.

When it came down to the shoes, Armas’ footwear was not visible but she likely rounded out her look with a sharp set of pumps, or a strappy silhouette.

Armas was also seen on the carpet taking photo ops with Brad Pitt, who serves as one of the film’s producers, and director Andrew Dominik.

The actress has worn a range of elegant styles leading up to the premiere. Prior to the premiere, she attended the photo call for the film alongside Julianne Nicholson, Adrien Brody, Jeremey Kleiner, Warren Ellis, and Dede Gardner. She wore a monochromatic ensemble, also by Louis Vuitton, that included a bustier silhouette top, skirt, oversize jacket with zippered details, and heels. Samantha McMillen styled her outfit and has worked with Mark Ruffalo, Janelle James, Michelle Pfeiffer, and Momona Tamada.