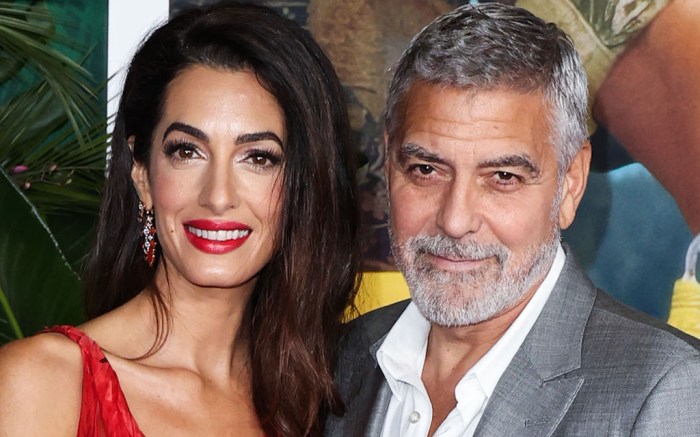 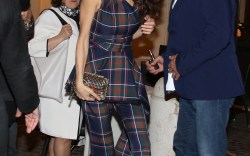 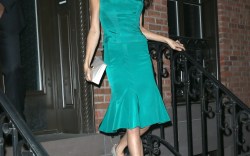 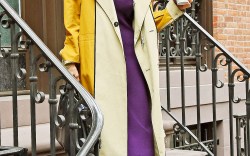 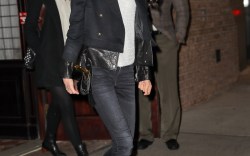 Amal and George Clooney graced the red carpet for the Los Angeles premiere of “Ticket to Paradise.” The husband and wife duo arrived at the Regency Village Theatre on Oct. 18 in sharp designer wear.

Amal was clad in a red archival Alexander McQueen dress from the designer’s spring 2003 collection. The ensemble featured shoulder straps and was dotted with streaks of primary colors. The British barrister’s gown was fitted with a tattered hem and a plunging scoop neckline. Paired alongside her dress, Amal carried a mirrored gold clutch and accessorized with coordinating jewelry that was surely statement-making.

On her feet, the human rights attorney wore barely-there Gianvito Rossi “Metropolis” nude sandal heels with a tan base and thin 3 to 4-inch stiletto heels. The footwear was secured to the public figure’s feet with vinyl straps that traveled up her ankles.

Beside her, George was looking just as dashing. The “Ocean’s Eleven” actor was clad in a  grey suit that consisted of a sharp blazer jacket set overtop a crisp white button down. The formal wear was paired with pleated grey trousers, a watch, and shiny black dress shoes.

“Ticket to Paradise” is an upcoming romantic comedy film directed by Ol Parker and written by Parker and Daniel Pipski. The film stars George Clooney and Julia Roberts, both of whom also produced it. The star-studded film sees a divorced couple teaming up and traveling to Bali to stop their daughter from making the same mistake they think they made 25 years ago.

Amal is known for wearing clothes from top designers, including Ermanno Scervino, Zac Posen, and Oscar de la Renta. She was recently seen in New York City in a Stella McCartney dress with thigh-high boots by Christian Louboutin.