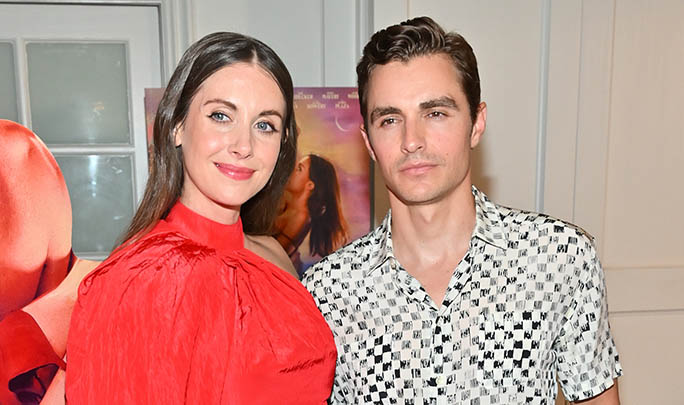 Alison Brie took the red carpet with a fiery arrival for the premiere of her new film “Spin Me Round” in Los Angeles on Wednesday.

Her textured red halter dress by David Koma had a one-shoulder asymmetric piece ruched under the collar with the lower bodice, giving a form-fitting look.

The “GLOW” star coordinated with an open-toe strappy sandal by Christian Louboutin.

As a single accessory, Brie opted for a gold bangle on her left arm, complementing her statement red color without overpowering the hue.

She opted for a middle part for her coiffed locks going down her back, and her makeup was natural with a soft dark pink lip. The actress was also seen sporting a classic French manicure.

Celebrity stylist Erin Walsh, whose other clients include Lucy Hale, Anne Hathaway and Eva Mendes, styled Brie for the event.

Brie’s husband, actor Dave Franco, accompanied her to the premiere. He went for a more understated look in a faded black checkered short-sleeve button-up shirt and laceless black dress shoes.

Brie first rose to prominence as an actress for her role in “Mad Men” as Trudy Campbell. She would go on to star in television shows, including “Community” and “GLOW,” the latter of which earned her two Golden Globe nominations.

In her latest film, “Spin Me Round”, which Brie also co-wrote with director Jeff Baena, she stars as a manager at an Italian restaurant chain who receives an invitation to a corporate retreat for the chain’s best managers. She then ends up on the yacht of the company’s founder, played by Alessandro Nivola, and romantic comedy antics ensue. In addition to Nivola, Brie also stars alongside Aubrey Plaza, Debby Ryan, and Molly Shannon. The film releases in theaters on Aug. 19.