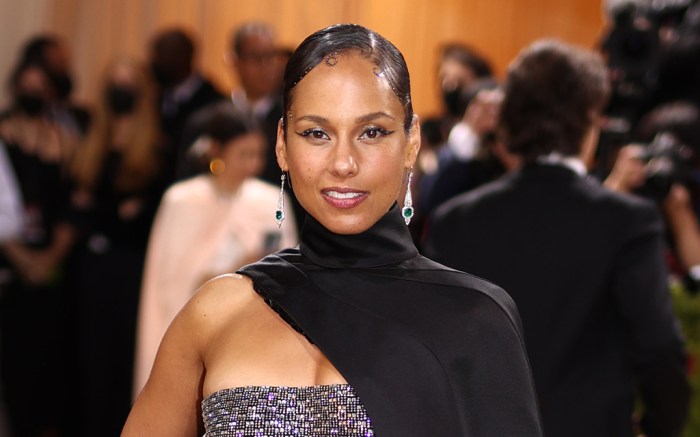 Stunning doesn’t begin to cover the gown and accompanying cape worn by Alicia Keys tonight at the 2022 Met Gala in New York.

The Grammy-winning pianist and singer arrived in a fitted silver dress from Ralph Lauren. The gown itself features a beaded strap that covers part of the chest and comes up into a beaded neckline. That said, the real star of the show is the accompanying cape.

This cape fits just over the one shoulder and cascades into a flowing train. It is completely black and features an outline of New York City all the way around in silver sparkling embellishments.

Keys’ hair was just as much a part of the ensemble as the cape. It featured sculptural disks lined in glitter placed all the way down her waist-length braid. These discs beautifully accessorized the back of the cape and tied the entire look together. For makeup, her cat eye and hairline were accented by tiny rhinestones. She also wore stunning diamond drop earrings that featured a large emerald at the bottom. It’s an apt tribute for the Big Apple-raised Keys.

In a video Keys posted on her Instagram, she joked with her husband, Swizz Beatz, who also dressed in a New York-themed outfit, that she felt “like a sculpture.” One thing is for sure, she’s certainly a work of art.