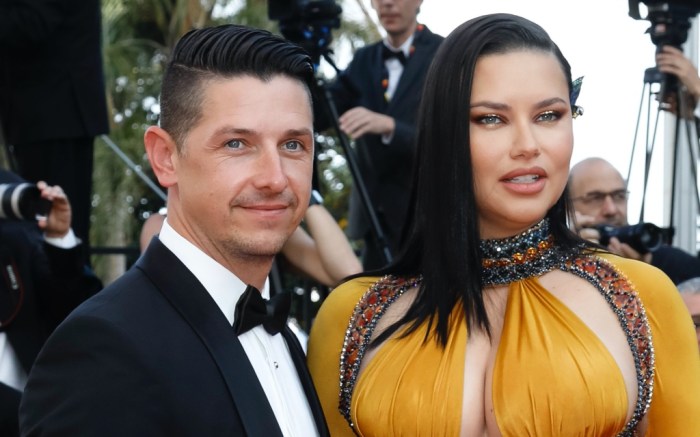 Adriana Lima gave her glamorous maternity style a regal twist while at the “Elvis” premiere with boyfriend Andre Lemmers during the 2022 Cannes Film Festival. The pregnant Victoria’s Secret Angel was one of numerous stars attending the occasion, including Shakira, Kylie Minogue, Sharon Stone and Olivia Culpo.

Lima took to the red carpet in dynamic fashion, wearing a sweeping golden silk gown. The goddess-like piece featured a long draped skirt with flowing sleeves and a plunging high-necked top. Adding overall dynamic edge to the entire piece were a series of bodice and side cutouts, formed from crossed straps covered in intricate black, amber and blue beads and crystals. The look was one of Lima’s boldest yet since announcing her pregnancy, and epitomized bohemian style with a glamorously formal flair.

The model only accessorized with an ornate gold cocktail ring and blue and gold statement earrings, allowing her dress to take center stage.

When it came to shoes, Lima’s footwear wasn’t visible beneath her gown’s long train. However, the Maybelline muse’s hem allowed a peek at a pair of peep-toe heels with curved toe straps and thin platform soles, seemingly crafted from maroon suede. The style was likely a pair of strappy or platform sandals with block or stiletto heels, intended to provide an elevated height boost. Whatever the style may be, it certainly allowed her gown — and baby bump — to take center stage.

Lima is the latest star to give maternity dressing a new look, increasing glamour, drama and personal style for greater self-expression and celebration. In recent weeks, Rihanna (prior to the birth of her son) and Nicky Hilton have also been seen in ensembles featuring cutouts, sparkle and high heels, proving there’s numerous ways to define “maternity style” — and opening the door for other expectant parents to do the same.

In fact, Lima’s made numerous statements on the red carpet in recent weeks as well — like the bondage-esque cutout gown with Larroudé heels she wore to Chopard’s party at the Cannes Film Festival’s start.

Click through the gallery to see the glamorous 2022 Cannes Film Festival arrivals.