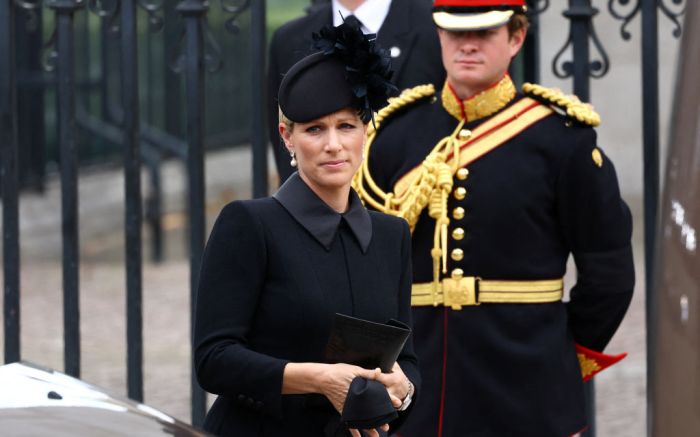 Zara wore a long sleeve belted black dress with a large flat collar and a seam line going down the bodice of the dress. Her statement-making accessory was a fascinator with faux feathers attached on the left-hand side. As part of the royal mourning dress code, women of the royal family must wear hats or black face veils. Zara’s additional accessories included a pair of black leather gloves and a black crocodile embossed clutch bag.

For jewelry, she opted for a certain pair of pearl earrings. Throughout her life, Queen Elizabeth II was rarely seen without her pearls, but this was not a nod specific to her. Traditionally for funerals, members of the royal family wear either pearl or diamond jewelry. These colorless gemstones fall in line with the protocol for no bright colors at funerals or during periods of mourning.

Queen Elizabeth II wore pearls herself during the funeral and mourning period for her father, King George IV. Diana, Princess of Wales, wore pearls for the funeral of Princess Grace of Monaco.

Mike also followed royal protocol and wore a black morning coat. He layered the outerwear over a black formal jacket, a black tie, white shirt, and coordinated with gray pinstripe pants. Mike also adorned his coat with several medals he has received, including one he received when he was made a Member of the Order of the British Empire in 2007 for his work as a rugby player, and two other medals, one from Queen Elizabeth II’s Diamond Jubilee and another from her Platinum Jubilee.

Zara is the eldest granddaughter of the late Queen Elizabeth II and the daughter of her second child, Anne, Princess Royal.