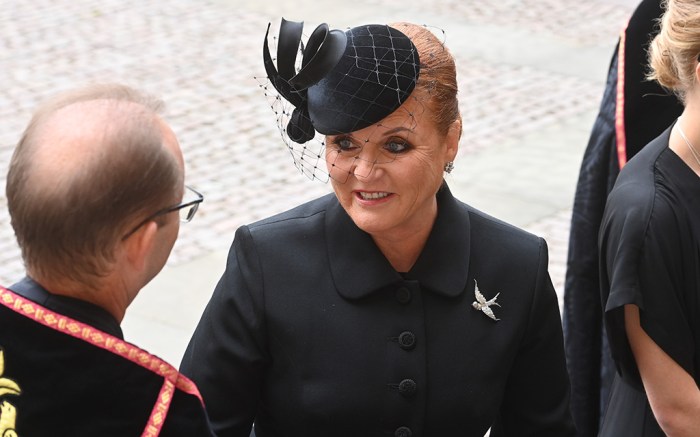 The Duchess of York and former wife of Prince Andrew dressed in a belted black blazer fitted with long cuffed sleeves and a Peter Pan collar, closed with black buttons that trailed down the front of the garment in a line. The royal family member paired the structured top with a fitted black midi length skirt, the pleated hem flaying out slightly, creating volume.

Given leeway with accessories, Ferguson wore short black gloves and carried a shiny pleated black clutch with gold hardware. As far as headwear was concerned, the 62-year-old followed in her royal family members’ footsteps, the Duchess wore a black fascinator embellished with small dainty flowers and a net veil that covered Ferguson’s features. The royal outfitted herself in silver jewelry consisting of shiny diamond studs and a coordinating bird brooch that paid tribute to the former Queen’s love of animals.

Back in the 1950s, it was considered improper for upper-class and royal women to show their hair in public. The etiquette rule has changed over the years, but it’s still expected for royal women attending royal events to wear decorative hats, veils, or fascinators.

The Duchess opted for a practical shoe style worn by many, Ferguson sporting black highly textured pumps with pointed toes, two to three-inch heels, and a glossy patent leather finish.