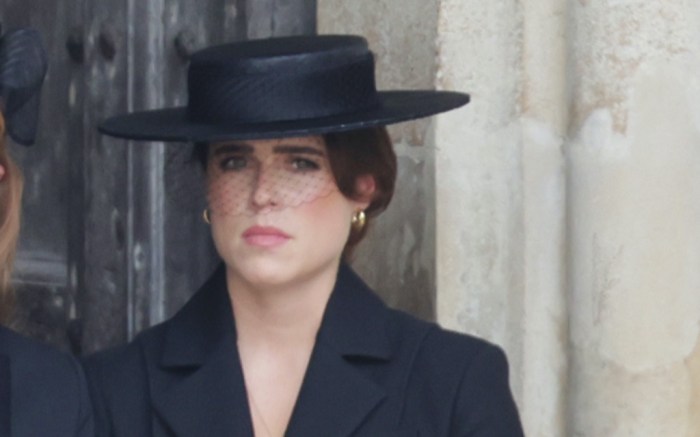 Princess Eugenie brought a surrealist spin to formal style for the funeral of Queen Elizabeth II in London on Monday morning.

Arriving at Westminster Abbey, the royal wore a long collared black coat punctuated by sculpted gold buttons. She paired the surrealist coat with black gloves and a matching gold-trimmed leather top-handle bag. Finishing her attire were black tights, as well as a structured woven hat with a wide brim and overlaid mesh veil.

When it came to footwear, the Princess wore a pair of black leather pumps. Her glossy patent style included triangular pointed toes and thin 3-inch heels, lined across their uppers with round shiny studs. However, her hat’s structure and textures affirmed the formalist and serious nature of the occasion, according to dress code traditions. Similar headwear was also worn during the occasion by Princess Beatrice, Meghan Markle, Kate Middleton and Camilla, Queen Consort.

Back in the 1950s, it was considered improper for upper-class and royal women to show their hair in public. The etiquette rule has changed over the years, but it’s still expected for royal women attending royal events to wear hats or fascinators.