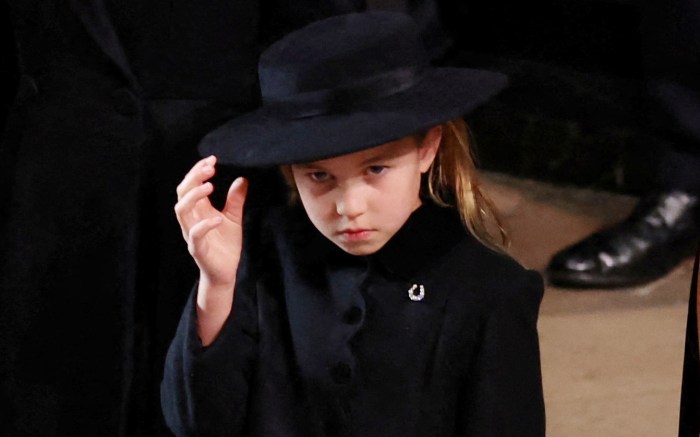 Princess Charlotte was accompanied by her older brother Prince George today at Westminster Abbey in London, the sibling duo dressed in formal wear in neutral tones for Queen Elizabeth II’s funeral. The eldest children of the Prince and Princess of Wales played a part in the funeral procession, walking just behind the coffin following their parents.

Like many who attended the ceremony, Charlotte appeared dressed in a somber set of wears, donning a high collared long black coat that flared out near the bottom and closed with black buttons.

The seven-year-old wore her first piece of jewelry to honor the Queen, a golden horseshoe brooch. Queen Elizabeth II always loved horses and made her passion for the animals public during her lifetime. At the time of her death, the late monarch reportedly owned more than 100 horses.

Charlotte also wore a hat fastened to her head adorned with a black bow, its tails hanging off of the hat’s brim.

The tradition of black mourning clothing started during the Roman Empire. Back then, the deceased’s family would wear a dark-colored toga as a sign of grief. This tradition persisted throughout medieval times. By the late 19th century, black clothing had become associated with mourning after Queen Victoria spent 40 years wearing only black to mourn the loss of her husband, Prince Albert.