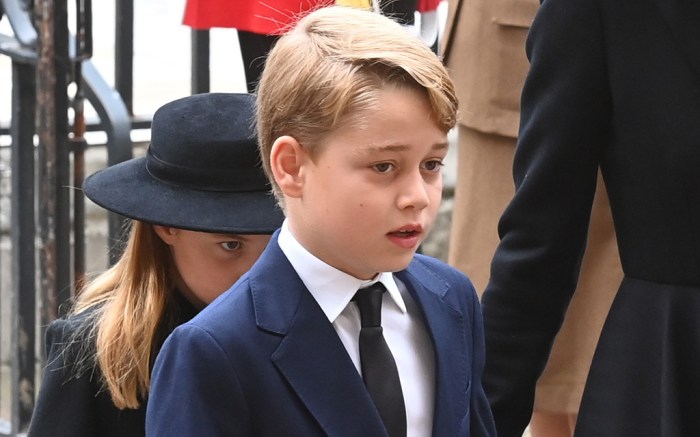 Prince George and his younger sister Princess Charlotte arrived today at Westminster Abbey in London, the sibling duo dressed in formal wear in neutral tones for their great-grandmother Queen Elizabeth II’s funeral. The eldest children of the Prince and Princess of Wales played a part in the funeral procession, walking just behind the coffin following their parents.

Much like his father, George wore blue but in a dark navy hue. The young Prince was clad in a suit that consisted of a double-breasted jacket paired with a crisp high collar white button down. The nine-year-old wore slacks in the same somber shade, further dressing up the style with a traditional black tie neatly tucked under his formal attire.

Accompanying his navy suit, the royal family member laced up black dress shoes with pointed toes and a patent leather finish that gave the footwear a high gloss look. The comfortable and formal style was seen on many men of all ages during the proceedings.

The procession saw men wearing a variety of grief wear in neutral tones from suits and mourning coats, to traditional militaristic garb accompanied by bright tassels and sashes like the ones George’s father William wore.