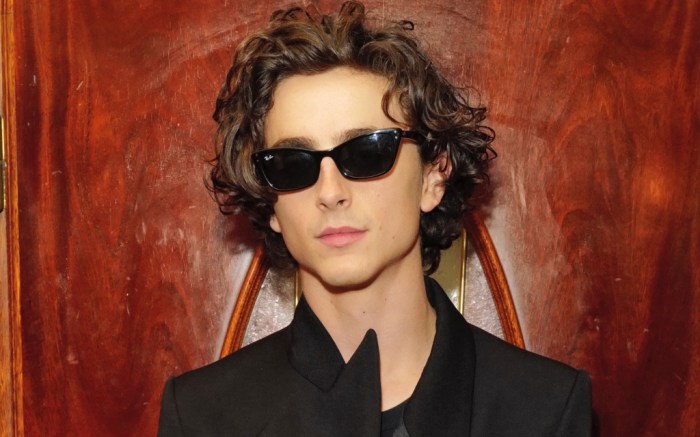 Timothée Chalamet took a break from promoting “Bones And All” to share some snapshots from his time in Italy, while debuting the film at the 2022 Venice Film Festival.

In a new post on Instagram, the “Call Me By Your Name” star posted a photo dump that included images of sneakers, an oil painting and even a photo of fashion designer Haider Ackermann posing atop a boat. However, it also featured two prominent snapshots of Chalamet himself, in two vastly different outfits. The first was seen in a photo of the actor with friend Stephane Bak, wearing a white T-shirt, black basketball shorts and white tube socks in a set of gray and white leather sneakers, complete with pink star detailing and black laces. The second, a mirror selfie Chalamet snapped in the evening, shows him posing in an edgier look: a pair of black pants, graphic T-shirt and pointed leather boots, topped with a leopard-printed jacket trimmed in sparkling crystals — all by Celine. Both proved Chalamet’s adept nature when it comes to fashion — which has also been seen on the red carpet throughout his start to the “Bones And All” press tour.

The photo dump followed Chalamet’s viral appearances during the Festival, which included his arrival, the “Bones And All” premiere and an appearance at the “British Vogue” Darlings party — all in the span of 24 hours.

During the Darlings party, Chalamet opted for a formal black wool Alexander McQueen blazer. The double-breasted style featured pointed satin lapels, given an edge from their asymmetric design that created a twisted silhouette. Finishing Chalamet’s ensemble were McQueen’s matching cigarette trousers, shining Cartier rings and a set of thin Ray-Ban sunglasses. He completed the outfit with a set of the British brand’s black Tread boots, featuring shiny leather uppers with rubber-lined square-heels. The style further streamlined his outfit, while ensuring it daringly toed the line between dapper and punk aesthetics.