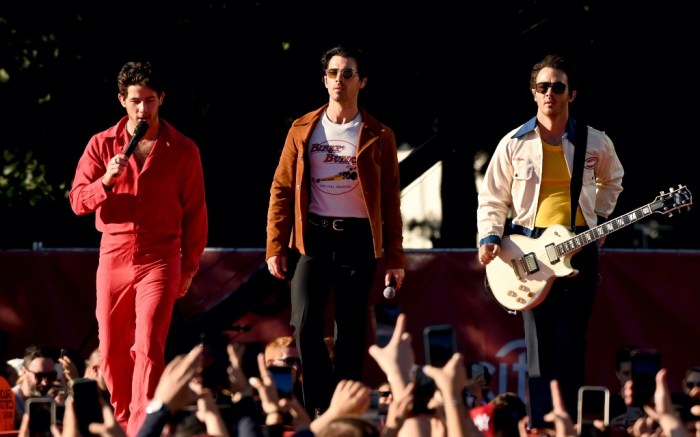 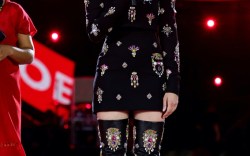 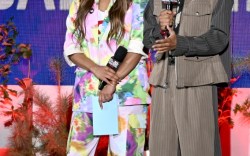 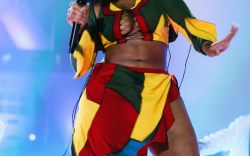 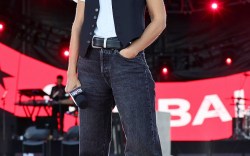 The Jonas Brothers brought groovy style to the stage at the 2022 Global Citizen Festival in New York City. Organized by the Global Poverty Project, the annual music festival aims to end extreme poverty.

For the occasion, the trio — featuring brothers Nick, Joe and Kevin Jonas — dressed in ’70s-esque style while performing their top hits, including “What a Man Gotta Do,” “Only Human” and “Sucker.” Nick arrived in monochrome attire, dressed in a bright red shirt and pants. Joe opted for a more bohemian ensemble, pairing a graphic T-shirt and black pants with a caramel-toned suede jacket. Kevin went full throttle into the groovy aesthetic, wearing pleated trousers with a yellow T-shirt and white and navy coach jacket. Joe and Kevin notably hit the stage wearing sunglasses to combat the midday heat, while Nick opted to go sans-shades and accessorize with a silver chain necklace.

When it came to footwear, all three Jonas’ wore sharp black boots. Kevin opted for a plain leather style with almond-shaped toes and short heels, while Nick took the easygoing route in a flat-soled pair. Joe brought the wildest take to the style, giving his outfit a Western flair with a Cuban-heeled set of boots with swirling toe embroidery. Though their styles all differed, the group’s matching hues and silhouettes created a united look during their performance.

The Jonas’ set also gained a burst of romance, thanks to Nick and Priyanka Chopra sharing a kiss onstage during it.