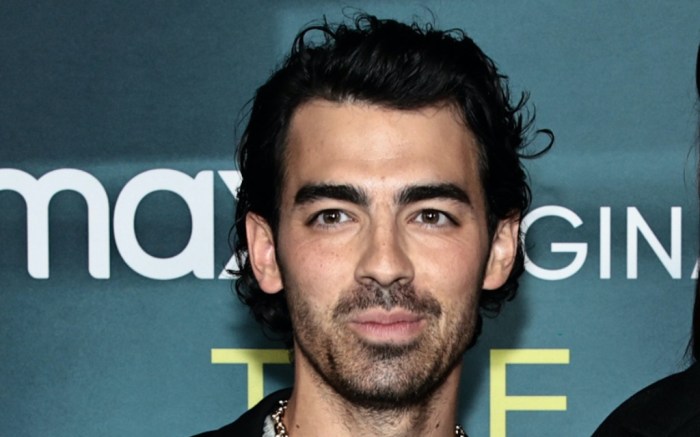 Joe Jonas returned to his Disney roots — albeit, in a surprise form — while sharply dressed on Instagram. The musician filmed a new video on the social media app with his band, DNCE, in their ongoing series of covering songs voted upon by fans. The trio’s latest? A cover of Hilary Duff‘s 2003 song “Come Clean,” from her hit album “Metamorphosis.”

Singing the song acoustically using an iPhone, a guitar and a Kleenex box, Jonas serenaded viewers in an Instagram Reel while wearing bright white jeans and a matching tank top. Giving the basic pieces a groovy spin was a light blue shirt jacket, complete with lettering and circle patches, as well as a classic black leather watch. Jonas finished his outfit with a string of pearls and pink-tinted sunglasses.

The song, which DNCE teased in a video on Monday, was given support by Duff, who commented “Ooo yes. Tell them k.”

When it came to shoes, Jonas slipped into a sharp pair of black Air Jordan sneakers. Featuring suede lace-up uppers, rounded toes and white outsoles, the set provided a contrast to his outfit’s lighter tones while still coordinating with its hints of black and white. It’s also Jonas’ latest sharp footwear moment after being spotted in a set of buckled loafers with wife Sophie Turner in May.

Sneakers like Jonas’ are a year-round trend, due to their versatility and classic nature. Monochrome pairs in leather and suede textures are popular from their ability to be worn with a range of casual or dressy menswear outfits — like new styles from Koio, Cariuma and Common Projects.

Jonas’ shoe style is free-spirited and bold, much like his wardrobe. The “Who’s In Your Head” singer’s footwear on the red carpet often consists of monochrome or colorful sneakers from a range of brands, including Converse, Off-White and New Balance. On the red carpet, dark brogues and boots are often his go-to’s. The star has also served as a campaign star for Guess and Diesel, as well as collaborated on a shiny version of Koio’s Retro Runner sneakers with the brand in 2021.

Sharpen your fall looks with black sneakers like Joe Jonas.