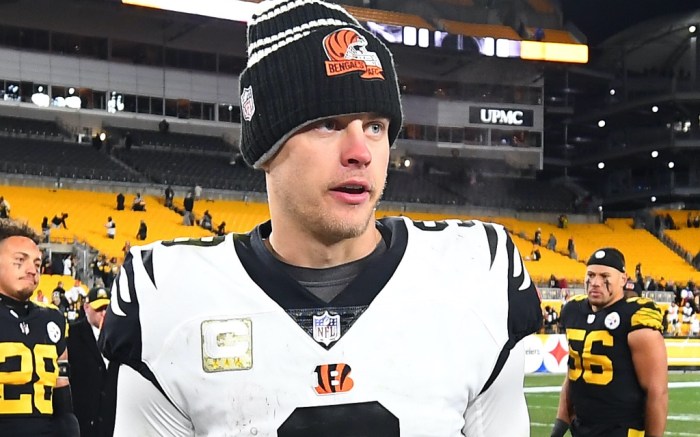 Joe Burrow brought sharp style to the latest Cincinnati Bengals game over the weekend, complete with a nod to NBC’s former hit comedy series “The Office.”

Ahead of the Bengals’ winning game against the Pittsburgh Steelers (37-30), the Bengals shared an Instagram Reel of their quarterback walking through the Acrisure Stadium’s tunnel. For the occasion, Burrow wore black trousers with a printed black hoodie, layered beneath a caramel suede collared jacket. The hoodie featured an image of the “Straight Outta Scranton” parody from the TV show “The Office,” with Steve Carell and Rainn Wilson.

Burrow’s ensemble was finished with a matching dark tan beanie, as well as a smoky gray and black leather Louis Vuitton duffle bag.

“Just a guy who is ready to throw some footballs,” the post’s caption read.

When it came to footwear, Burrow wore a pair of Nike sneakers. His $170 Air Max 95 N7 style, crafted from light tan suede, featured rounded toes and a berry red-stained texture. The set, which included overlaid webbing in hues of bright orange, neon yellow and tonal blue, was complete with a curved midsole, thin curved laces and cushioned soles.

The pair also carries a special meaning: it’s inspired by ribbon skirts worn by Native and Indigenous communities in North America, in partnership with the Nike N7 Fund — which connects Native American and Indigenous youth to sports through financial grants.

For shoes, Burrow often wears tonal and colorful sneakers from Nike, particularly Air Jordan styles — including the latter’s viral collaboration with Dior. On the red carpet, he can be seen in neutral black, brown and gray-hued loafers crafted from leather and suede.

PHOTOS: Discover 50 years of Nike across pop culture in the gallery.