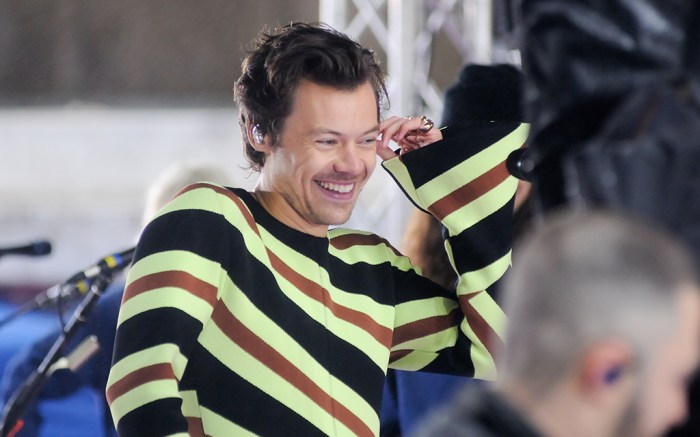 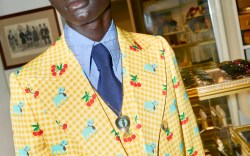 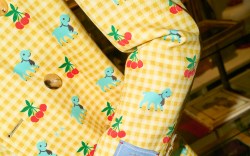 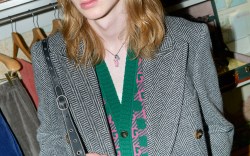 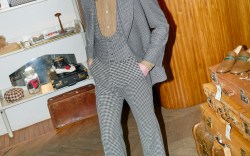 In the leading cover for the issue’s main profile, shot by Amanda Fordyce, the Grammy Award-winning star wears a custom white-and-red striped Marni unitard, as well as a knit golden yellow cardigan by the brand. Styles’ look is finished with his own golden cross pendant necklace. The contrast of retro and cozy styles has become a new signature of Styles, particularly during the new era for his current album “Harry’s House.”

Throughout the accompanying editorial styled by Alex Badia, the “As It Was” singer wears a range of similarly vintage-inspired outfits with a dash of glamour. In one shot, he poses in a gray knit vest and sequined silver skirt by Vivienne Westwood, plus a multicolored feather boa. In another, he dons an all-white ERL outfit atop multicolored floral Charles de Vilmorin tights. Another features him in a cherry-printed Loewe tank top, tucked into iridescent blue Gucci trousers with polka-dot suspenders. In one of the punchiest outfits of the bunch, he carries a bouquet of balloons while cheerfully posing in glittering blue JW Anderson shorts with a green, white and yellow Botter popcorn-textured polo shirt.

Throughout, Styles wears his own gold jewelry — as well as a pair of white lace-up canvas sneakers by ERL.

In the accompanying interview with writer Brittany Spanos, Styles opens up to discuss an array of topics — including his relationship to therapy, fame and upcoming buzzy film roles in “Don’t Worry Darling” and “My Policeman.” Particularly, he also shares insight into how his fan base has responded to him dating actress and director Olivia Wilde, as well as his relationship to his sexuality.

“Sometimes people say, ‘You’ve only publicly been with women,’ and I don’t think I’ve publicly been with anyone,” Styles says. “If someone takes a picture of you with someone, it doesn’t mean you’re choosing to have a public relationship or something.”

Styles also takes time to talk about love and the importance of friendship, as well as having a positive relationship with oneself.

“The fantasy, or the vision, or the version of you that people can build you up to be feels like a person that isn’t flawed,” the “Dunkirk” actor says. “What I value the most from my friends is I feel like I’m constantly reminded that it’s OK to be flawed. I think I’m pretty messy and make mistakes sometimes. I think that’s the most loving thing: You can see someone’s imperfections, and it’s not [that you] love them in spite of that, but it’s [that you] love them with that.”