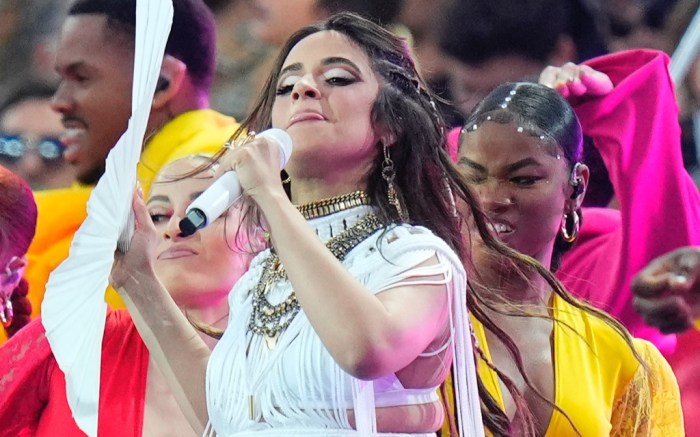 Camila Cabello went monochrome — with a surprise outfit reveal — for her latest performance in Saint Denis, Paris. The singer took to the stage during the UEFA Champions League’s final soccer game between Liverpool and Real Madrid at the Stade de France arena.

The Fifth Harmony alumni began her musical medley — including performances of “Señorita,” “Bam Bam” and “Don’t Go Yet” — in a sheer white long-sleeved crop top and matching maxi skirt covered in flounced ruffles, custom designed by Carlos Pineda. However, the ensemble was swapped midway through her colorful carnival-themed performance for a second Pineda outfit that was significantly more risqué. Midway through her performance, Cabello removed her first outfit to reveal a second: a white bra and bottoms with sheer tights, layered with a white tasseled crop top and briefs that swirled as she danced.

The musician completed her ensemble with layered gold and crystal necklaces with a range of charms and pendants by Dylanex plus large statement earrings and sculpted rings.

When it came to shoes, Cabello boosted both looks with the same pair of tall boots. Her style included leather uppers in a knee-high silhouette, as well as almond-shaped toes. The style also appeared to feature flared heels totaling at least 3 inches in height, ideal for a sharp height boost while moving around the stage.

You can view her full performance below:

For footwear, the “Havana” singer regularly wears sneakers by Nike and Adidas, in addition to slides and sandals by Franco Sarto, Birkenstock and Steve Madden. However, her wallet-friendly shoe style often incorporates brands like Topshop, Candie’s and UrbanOG as well. Cabello often pairs these with dresses, tops and bottoms by affordable brands like H&M, Forever 21 and Zara, in addition to high-end labels like Dolce & Gabbana, Isabel Marant and Versace. Outside of fashion, she also serves as an ambassador for L’Oreal and has starred in campaigns for Guess, Candy’s and Skechers over the years.

Discover Cabello’s shoe style over the years in the gallery.