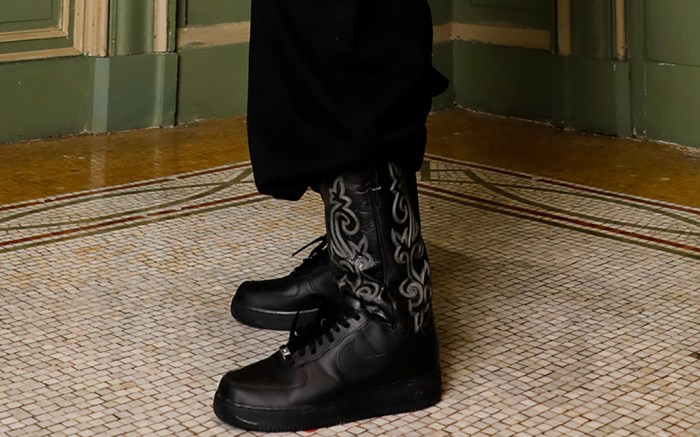 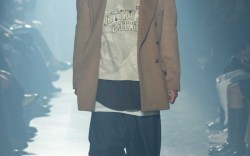 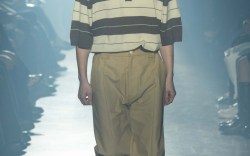 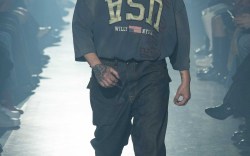 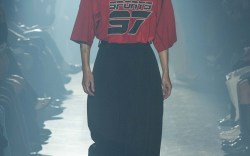 For this unexpected footwear moment, the designer, whose day job is SVP of design at Calvin Klein, tapped conceptual sneaker designer Andy Martinez of 0831am for two pairs of Martinez’s internet famous Air Force 1s that are modified into cowboy boots. These Air Force 1s will not be available at retail.

For Chavarria, featuring Nike product in his show was part of his vision for the collection. “Throughout the collection, we see hints of classic American iconography, as often worn by aspiring or recent immigrants and first-generation Americans as a way of connecting with this American dream,” Chavarria said to FN backstage after his show. “Nike is one of those brands that some immigrants gravitate too and are thought of as ‘very American’. Nike equals American.”

Telling stories of immigrants is always a consistent message in Chavarria’s collections.

For fall 2022, as the designer aimed to tell the story of the Latinx movement in Mexico City, New York City, and Los Angeles. “Through these distances we cannot be divided, the designer’s show notes said. “Despite political and geographical distances, we cannot be separated. We are Uncut from our siblings worldwide.”

Dickies was another American brand Chavarria featured this season. This is the seventh time the two have teamed up.

In this collection, the original Dickies work shirt becomes a statement piece with oversized shoulders in tandem with the reworked Eisenhower jacket to feature monstrous sleeves, and the classic 874 work pant comes with a higher rise and flared, wider leg.

Apart from Dickies and Nike, other bold shapes are complemented by rich wools milled by American Woolen Company. Once the world’s largest woolen mill, the American Woolen Company has persevered to maintain its skill and history through the rise of synthetic fibers and the manufacturing industry’s shift to largely moving out of the U.S.

Chavarria also experimented with new fabrics for this season. Sequins and latex interplay with houndstooth to create a new and modern feel while traditional workwear styles are seen maximized and in new fabrications.

As for the possibility of launching his own footwear line, Chavarria said, “I definitely want to do my own footwear, but when the time is right. Never say never.”