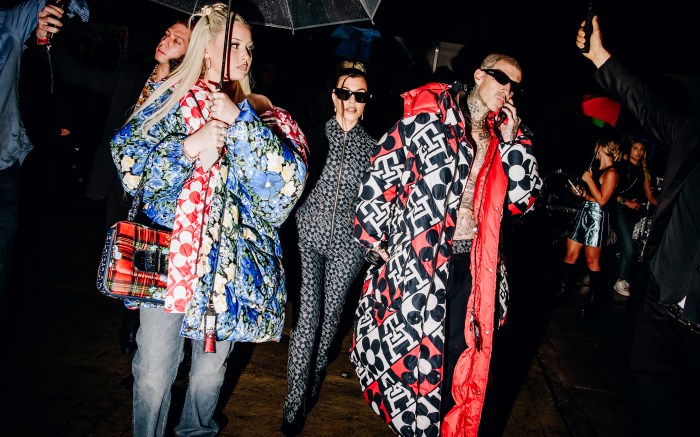 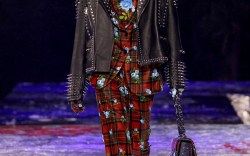 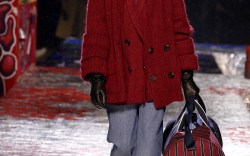 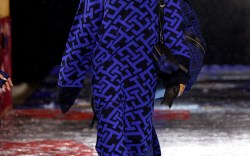 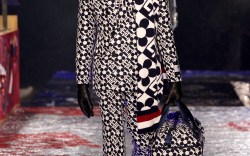 Tommy Hilfiger has always known the power of music in fashion. From sponsoring Britney Spears’s first tour back in 1999 to reigning as one of the go-to brands for hip hop and R&B stars in the ’90s, the designer has touched the music industry many times in the designer’s 37-year history.

Which is why it shouldn’t have come as a surprise that he had Travis Barker live on the drums on Sunday night at his fall ’22 New York Fashion Week show.

The surprise performance at the show’s finale was just one of many facets in the Tommy Hilfiger multiverse. Dubbed “Tommy Factory,” the see-now, buy-now collection was a star-studded event both on the runway and in the front row, culminating with the former Blink-182 drummer stepping onto the catwalk, shrugging off his Tommy Hilfiger duvet coat and playing shirtless in the rain as models paraded in front of him.

In the collection, which is now available, Hilfiger embraced some of the more preppy hits of his career. An oversized rugby shirt (reminiscent of the one that Snoop Dogg wore while performing on “Saturday Night Live” back in the early ’90s — a moment that Kanye West recently referenced as “the most impactful marketing moment of my young life” in an Instagram post). It was a throwback look that also squares nicely with the #oldmoneyaesthetic running through TikTok lately.

It was all part of a multiverse experience that was livestreamed from a rain-soaked location at Brooklyn’s Skyline Drive In outdoor movie theater locale, where an A-list lineup — from Barker and wife Kourtney Kardashian, plus mom Kris Jenner and Corey Gamble to John Legend, Shawn Mendes, Kate Moss, Jon Batiste and more — braved the weather to sit on the front row, umbrellas up and ponchos on.

Hilfiger also once again proved his commitment to making fashion more democratic, honoring diversity and inclusion on a few levels by casting the show with a variety of models, from Winnie Harlow, Hari Nef, Precious Lee, Alton Mason and Julia Fox to newbies in all shapes and sizes.