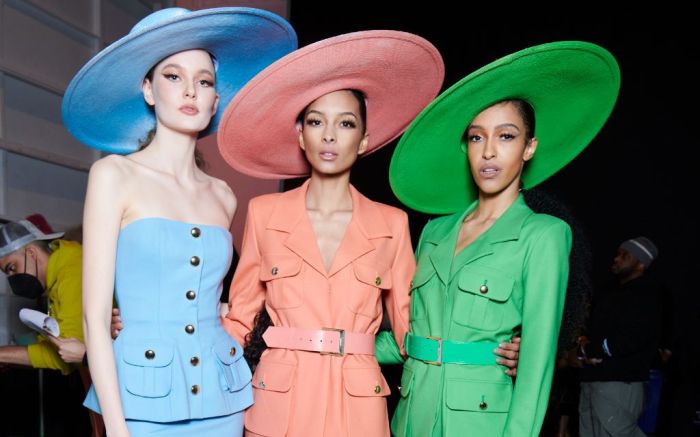 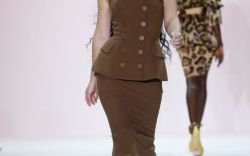 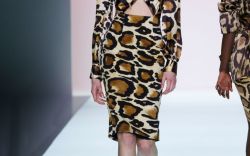 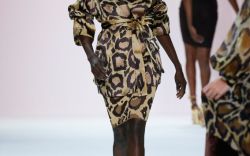 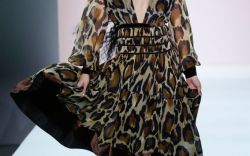 If there’s anyone who knows how to have a good time at fashion week, it’s Sergio Hudson. The Los Angeles-based designer works with an array of colors, encourages his models to walk with twirls and sashays, always has a crowd-pleasing soundtrack (last season Sheila E played live drums) and collaborates with shoe designers on some of the more statement-making heels of NYFW.

This season, Hudson tapped Malone Souliers to create a pair of platform sandals just as colorful as his spring ‘22 collection – a perfect palette match, actually. The series of heels were the punctuation mark to a see-now, buy-soon season filled with pastels, safari themes and lots of ’90s pop culture references, including “Clueless” and TV characters Whitley Gilbert of “A Different World” and Lisa Turtle of “Saved By The Bell.”

“The color inspiration really came from the Ndebele tribe in Africa,” Hudson told FN backstage, ahead of his Sunday night show at Spring Studios, as models zipped into dresses and strapped on their matching platforms. “They wear all these great pastel colors and each color means something for them. So the color inspiration came from that, and then that’s where the safari idea came from and I thought what about building a bridge between these two worlds that I love both.”

The pastels trickled down to the heels, too, in baby blues and blush pinks, while a series of golden versions of the lace-up heel with fringed pom-pom accented looks in other hues. The Jojo style in gold metallic and the Lilli style in beige and coral are now available for pre-order on both SergioHudson.com and Malone Souliers.com.

Hudson’s new heels are decidedly party shoes, fitting in nicely with glitzy looks taking over both spring and fall ’22 season. But that doesn’t mean the designer is abandoning his footprint in the upper echelons of professional dressing (i.e. last year’s Inauguration Day looks for both former first lady Michelle Obama and Vice President Kamala Harris).

“You can wear a great suit to a party, too,” said Hudson. “I have so many clients that just don’t like to wearing evening gowns, so they wear a great tuxedo from me, or a jumpsuit. It’s all about options. You’ll see something for everybody in the collection, for sure.