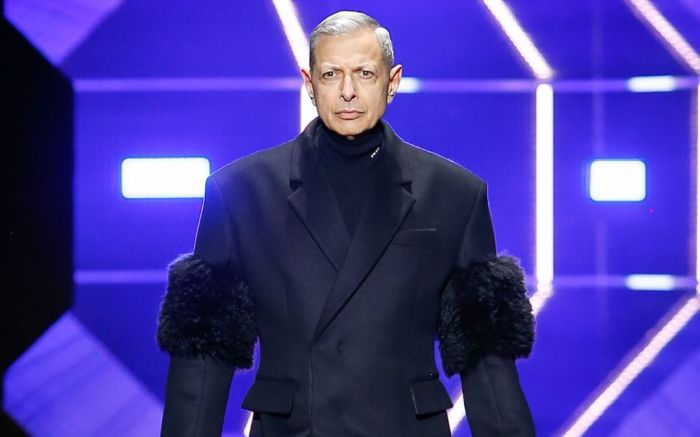 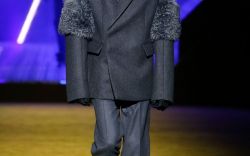 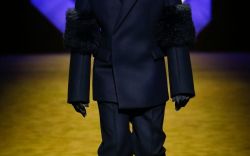 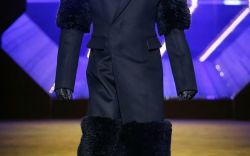 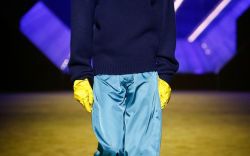 By now it’s no secret that Miuccia Prada and Raf Simons love to mix it up with highbrow creatives. Nearly a year ago, the co-creative directors hosted a post-show virtual panel discussion following its fall ’21 women’s runway presentation that featured actress Hunter Schafer, director Lee Daniels, architect Rem Koolhaas and designer Marc Jacobs for a conversation on optimism during the pandemic, among other topics.

While the post-show Q&A is clearly a Prada tradition, the brand is also beginning to imbed its actual collections and shows with the minds it admires. For its fall ’22 men’s runway show, which it presented Sunday during Milan Men’s Fashion Week, Prada and Simons tapped actors Jeff Goldblum and Kyle MacLachlan along with eight other Hollywood names (Thomas Brodie-Sangster, Asa Butterfield, Damson Idris, Tom Mercier, Jaden Michael, Louis Partridge, Ashton Sanders and Filippo Scotti) for a literal parade of stars.

But the casting wasn’t necessarily about adding star power for clicks and likes. Prada’s curation of names was intended to show integrity and steadily-earned acclaim instead of sensationalism, an ethos the designers mentioned in their show notes on the collection itself. “Here, everyday reality is valorized, its signs and signifiers exchanged with those of elegance and sophistication,” it read, along with an acknowledgment that cinema and theater often mirror reality.

The reality of the actual collection was a turn to the sharp lines of tailoring that have come to define much of the more sensationalized fashion of today (it’s nearly impossible to avoid the influence of Demna Gvasalia’s Balenciaga here). Prada and Simons peppered these stoic but statement-making silhouettes with their signature texture, this time with puffs of shearling and equally signature color palette.

The conflict of seriousness and sensationalism followed the entire collection, and while words like “esteem,” “sophistication” and “lasting value” populated the show notes, it was difficult to assess which pieces were intended for reality versus show. Footwear was serious and stoic — far from the platforms and pop-art detailing of recent seasons — with a single square-toed black leather boot style dominating the runway. It was juxtaposed with a focus on statement outerwear, which itself was juxtaposed with traditional tailoring and aforementioned flair — contradiction that was perhaps Prada’s very point.