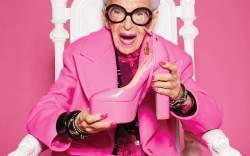 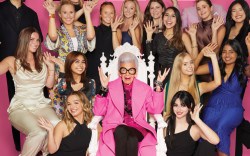 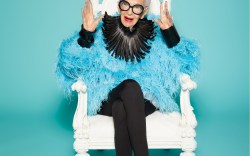 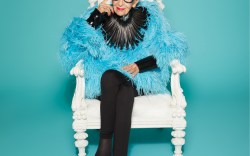 Iris Apfel has an important message for all those “quiet quitters” out there. “You’ve got to work. Everybody’s got to work and produce something. It makes you feel alive,” says Apfel, who has just arrived on set at PMC Studios in August, wearing her signature oversized black frame glasses and a bright red lip.

It’s not easy being the star of the show — let alone one who’s lived for a century. While age is certainly a factor in the admiration for Apfel, it’s her gumption, tenacity and, of course, cool sense of style that keeps the world hanging on her every word.

She’s soft spoken at first on set, admiring the shoes pulled for her FN cover shoot. A kitschy pair of Christian Louboutin mules particularly catches her attention, as does a set of bright pink Crocs. But as soon as the cameras start to roll, Apfel lights up with punchy, humorous observations and the matter-of-fact statements that are her calling card.

“I am not the usual fashionista. I don’t follow trends. I’m not one of the mob. I do my own thing. And I like to get that point across,” she says, wearing a bright blue Tom Ford feather coat and a choker necklace with matching cuff bracelets. “I never felt I had to conform. I didn’t have to conform. I wanted to do everything but. So why should I? I wouldn’t be having anything new to say.”

It’s this out-of-the-box thinking that she wants to pass down to the next generation of fashion stars. And it’s something Apfel has been hard at work on for more than 10 years.

Apfel is known, yes, for eclectic style, for founding her textile firm Old World Weavers with her late husband Carl Apfel, for working with the White House to oversee various restoration projects for nine presidencies — and later for signing as a model with IMG at 97. But that is just scratching the surface of her extensive career paths. And the one that’s most important to her? Professor.

Since 2010, Apfel has been a guiding force behind an immersive learning experience for the Textiles and Apparel Program at the University of Texas at Austin, for students who aspire to work in fashion. What was originally meant to be a one-off speaking event and dinner turned into a decade-long endeavor, called UT in NYC. It allows a group of hand-selected students to receive real-life experience in New York for a week, with Apfel leading the way.

“The beauty of the trip and the richness she’s providing is long lasting,” said program director Nancy Prideaux. “From a teaching perspective, it’s priceless.”

One day before Apfel’s photo shoot, her class of 16 students arrived wide-eyed for their own moment in front of the camera with FN. From afar, Apfel called in to check on “her little chickens,” as she adoringly calls them, as they embarked on the 10th UT in NYC experience (the program went on hiatus in 2020 and 2021 due to the pandemic). Their faces immediately light up with excitement when she rings — and with good reason.

Apfel is more than a guest speaker in the program. For instance, proceeds from “Iris: The Coloring Book,” which launched in 2020 in partnership with the UT in NYC program, helped provide scholarships for some students to participate in the trip. And during their visit, they’ll meet with major fashion executives and designers — all curated by Apfel.

She admits the curriculum came together haphazardly. “I really didn’t know what the devil I was doing [when we started]. I just plunged in,” she recalled. “That’s how I do everything. I thought, ‘If I’m starting, I might as well start at the top.’ So I called everybody that I knew was doing something interesting and upbeat in the field and it took off like wildfire.”

And it has become something of a passion project. “This means a great deal to me,” she added. “I work very hard at it. And I feel very strongly that something like this was very much needed. This program gives them an inkling of what the real world is like, which is very important, or you can’t function.”

The schedule this year included attending FN’s CEO Summit at the Plaza Hotel, to hear from speakers such as Olympian-turned-entrepreneur Allyson Felix, as well as top execs at Zappos, Nike, Foot Locker and more. The students also received a personal tour of The Costume Institute at the Metropolitan Museum of Art, the Nordstrom NYC flagship and the Ralph Lauren factory. And they had one-on-one meetings with designers Tommy Hilfiger and Naeem Khan, IMG’s Leslie Russo and Bergdorf Goodman’s Linda Fargo. The week concluded with a cocktail celebration at Bergdorf’s and parting words of inspiration from Apfel herself.

“We are all very fortunate to have Iris, a woman of such intelligence, curiosity, humor and style who still has so much to give us,” said Fargo. “It’s an honor to be in her orbit as both students and a friend. With each year, my respect for her grows exponentially. She’s unapologetic, outspoken and wildly individualistic. She’s an inspiration to people and students of all ages. She really is a standalone phenomenon. The students are lucky to have her as an honorary professor and mentor. Every minute with her is both a life and fashion lesson.”

Apfel’s wisdom has even influenced fashion’s most successful and seminal figures, including Hilfiger. “One of the best things she’s taught me is, in order to stay young, you need to think young. It’s all in your mindset,” he said. “She also firmly believes that you can find so much inspiration from youth — that they truly bring so much fresh energy and creativity to the table.”

For Apfel, she says that teaching the next generation feels like a responsibility — especially because her optimism about the future of fashion is less than bright due to its lack of newness and creative drive. “Everybody does the same old, same old and it doesn’t make any sense. Nobody wants it. Everybody’s tired of it. Everybody’s afraid to take a chance. And unless you take some chances and make changes, nothing much is going to happen and it’s going to drone on this way,” she stressed. “[But] I feel very much that [the program] is working.”

Aside from creative inspiration, the program offers a launching pad for fashion careers. Following the experience, UT students have landed jobs at Bergdorf Goodman, Michael Kors, Coach, Tommy Hilfiger and more, according to Prideaux.

Not only has Apfel provided connections for the students, but she’s also instilled the importance of fortitude. “Iris brought the perspective of what do our future leaders need to know? What do they need to be exposed to?” said Prideaux. “Understand it is a tough business. It is an unbelievable world of so many opportunities — and it’s not just design. She brought to them this sense of purpose, this sense of drive to be true to themselves and understand they have to work really, really hard.”

After all, Apfel’s work ethic is unparalleled.

Her first job? A “copy girl” at Fairchild Fashion Media, where she had to transport messages between editors up and down stairs all day long. For Apfel, it’s a full circle moment being back in the Fairchild offices decades later.

“If you can believe it, in those days, I made the magnificent sum, now listen carefully, of $15 a week — a week!” she recalled. “I wanted to get into the business, and I always believed in starting at the bottom. I’m not one who longs for the red carpet and the corner office. I think you have to pay your dues.”

Whether she likes it or not, Apfel has truly become an icon — a word that is often overused and misused. But in her case, it’s a fact.

“It’s very nice to be a fashion icon and I don’t dislike it — don’t misunderstand. It’s very nice to be flattered and be told all kinds of stuff. It’s very good for, how shall I say it, the soul. But I mean, there are more important things in the world,” she said. “Things like that don’t send me. [What sends me] is doing interesting things, new things, meeting new people, learning how to do things. Things that I think are more important.”

Apfel describes herself as a private person, but she has let the world in with countless personal appearances, HSN segments and her 2015 documentary, “Iris,” created with legendary documentarian Albert Maysles. She was 93 at the time and now, almost 10 years later, her wit and tenacity haven’t wavered.

What seems to be her biggest constant is an insatiable appetite to remain curious. It’s her biggest advice to students, too.

“I stress curiosity,” she said. “If you’re not curious, you can’t be original and if you can’t be original, you don’t have anything new to say. So who in the devil would want to listen to you? I’m [big] on originality. I think it pays off in the end. You may have to suffer a little bit at the beginning. But it always pays off.”

Such guidance has given her students confidence in chasing their dreams, explained Prideaux, who added that Apfel’s tireless efforts have laid the groundwork for the University of Texas’ next chapter: a summer-long fashion course at its physical campus in New York.

For Apfel, what makes her most happy is accomplishing something she’s set out to do.

“I guess I was put here to do something and to create something. And I think to some extent, I’ve done that,” she said. But she’s not quite done yet. “My God, to me, the idea of stopping working is just horrifying to me — horrifying,” said Apfel. “I wish I can continue for a while. I still have a lot to do.”

To see more from the Iris Apfel cover shoot, click through the gallery.