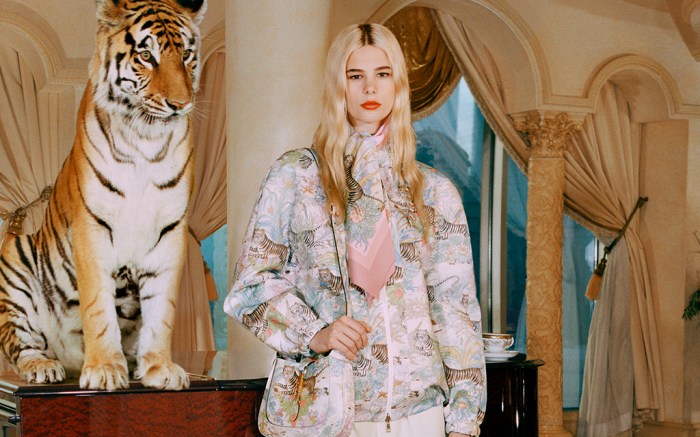 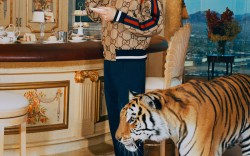 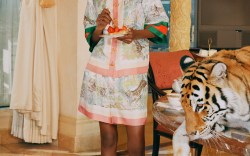 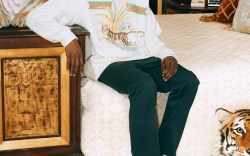 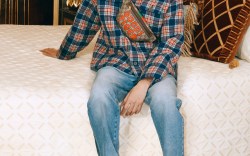 Gucci is celebrating the Year of the Tiger.

The Italian luxury brand has launched a festive Chinese New Year collection featuring a wide-ranging selection of ready-to-wear and accessories, for both men and women, including various renditions of the animal – a mainstay of creative director Alessandro Michele’s collections and a reflection of his fascination with nature.

In a statement about the launch, the brand said that collection will debut a new print, based on a late 1960s archival design by Gucci Flora creator Vittorio Accornero, that depicts the tiger against a colorful backdrop of greenery and flowers in a pastel palette.

The print is presented in an all-over variation across the ready-to-wear assortment from outerwear and denim to shirts and dresses among other items. Prints, patches and embroideries can also be seen on signature shoe and bag silhouettes, often combined with the GG monogram, Gucci said. Eyewear, silk accessories, watches, and hats round out the Gucci Tiger selection.

The Gucci Tiger collection comes to life in a campaign conceived by Michele and shot by photographer and director Angelo Pennetta. In a literal reference to the collection’s main motif, actual tigers roam the scenes of the campaign, having joined a group of friends for high tea in various spaces of a luxurious, retro-style hotel. A second part of the campaign starring four special guests will be unveiled later this month, the brand stated.

Gucci said that its pop-ups will feature an illuminated “Gucci Tiger” sign in a forest-like space. “Giant leaves outlined by LED lights form a canopy as the greenery elegantly contrasts with the checkered black and white flooring that distinguishes the space.

The location is furnished with matelassé velvet poufs and matching stock bunkers while aged brass racks and shelves are used to display the products, illuminated by chrome spotlights placed on tripods,” added the company.