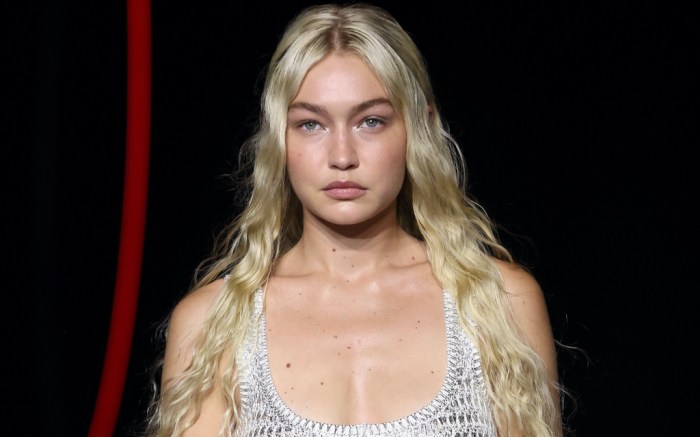 It was a look fit for “House of the Dragon.”

Sporting a noticeably lighter shade of locks — nearly Targaryen blonde — Gigi Hadid made an appearance on the runway at Chloé’s spring summer ’23 show at Paris Fashion Week on Thursday wearing a look that would feel right at home on the “Game of Thrones” HBO prequel that is currently dominating TV steaming.

Hadid was dressed in a silver floor-length silver dress from the new line. The chainmail-looking garment (paired with a white bra and briefs) was actually an open-weave crochet done in an metallic thread, with loops that grew larger as the dress made its way down to the floor.

The model also wore white sandals from the collection to complete the look. The gladiator-style shoes received a lift with its platform sole, which added at least 2 inches to Hadid’s frame. The sandals also featured black stitch detailing and several white straps across the top of the foot as well as the ankle, similar to the brand’s sustainably-minded Nama sneaker. The spring summer ’23 collection also featured ready-to-wear pieces that featured the footwear’s oversized stitching.

Off the runway, Hadid’s shoe choices typically run on the casual side. The model often wears sneakers by Converse, Nike, Puma and Reebok, which she collaborated with on a capsule collection in 2018. Slides are one of her longtime favorites, which she’s worn from brands like Adidas, Ugg and Alexander Wang. However, Hadid’s also known to style show-stopping heels, especially pointed-toe pumps, boots, and strappy sandals by Stuart Weitzman, Giuseppe Zanotti and Christian Louboutin for formal occasions. Though she got her start in fashion by working as a model, Hadid has since dipped her toes into designing, and she recently launched her own line called Guest in Residence.