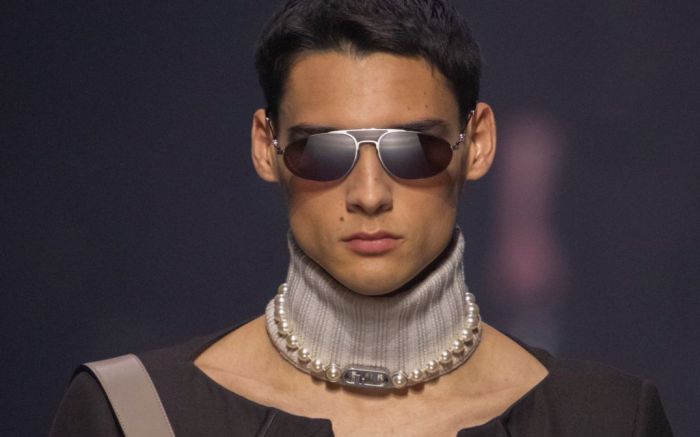 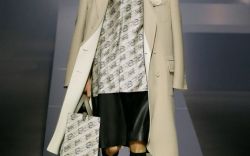 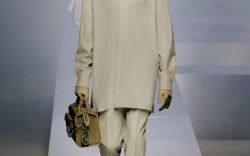 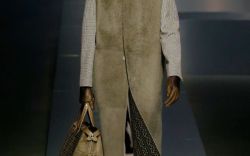 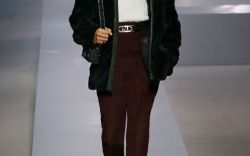 As fashion continues to define what getting dressed will look like in a post- and continuing pandemic, Fendi dove deeper into its exploration of gender fluid menswear for the fall ’22 season, proving that even a heritage fashion brand can push past the existing codes and categories of the luxury market.

Crop tops and hot pants may have been on order for its spring ’22 season (we’ll soon get to see how those items will actually be worn in real life as collections start to roll out in the next few months), but for fall, Fendi was relatively buttoned up and modest, with only a knee showing here and there. It was Silvia Venturini-Fendi’s interpretation of the “New Roaring Twenties,” a retro-tinged lineup of traditional pieces that the brand dubbed “neo-dandy.”

Of course, men’s Mary Janes with knee socks, pearl necklaces, crystal earrings, knitwear cutous, culottes and skirts and purses slung over the shoulder can hardly be seen as elements of traditional menswear in the modern age. All of the aforementioned walked the runway adorned on male models and combined with the usual trappings of a Fendi collection, from sumptuous outerwear and cleanly tailored trousers with a slight flare to bucket hats, eyewear and leather top-handles and duffles.

As it turns out, those pieces, traditionally defined as feminine, are not entirely new to the current male fashion lexicon. The styling called to mind Pharrell’s tendency to wear Chanel’s women’s tweed jackets, a look that has fully permeated the male hip-hop and sneaker collector community, or the more recent obsession with men’s pearl necklaces, which hit critical mass when MLB player Joc Anderson wore his strand during the playoffs (“I just saw the pearls and I was, like, you know what? That looks cool,” the athlete told press).

Menswear is now a few seasons into its full-on exploration of traditionally feminine silhouettes, accessories and details being worn on men, and there have been both hits and misses by now. Platform shoes (undoubtedly made popular by the Rick Owens Grilled boots) are no longer much of a sensation, but Fendi’s Mary Janes offer another take on a traditionally feminine silhouette going masculine (the addition of a watch face on the strap of one of the shoes will certainly help some men see the shoe style in a new light). The shoe’s accompanying knee socks and culottes or knee skirts veer a bit into “Mrs. Doubtfire” territory, but nevertheless offer another point of view on redefining fashion in a new gender realm.

As retro and gender-bending as the collection was, Fendi was keen to bring it all into the 21st century and beyond with the announcement of a partnership with Ledger, a digital asset management system focused creating a user-friendly and secure hardware wallet for cryptocurrencies and other digital assets, such as NFTs.