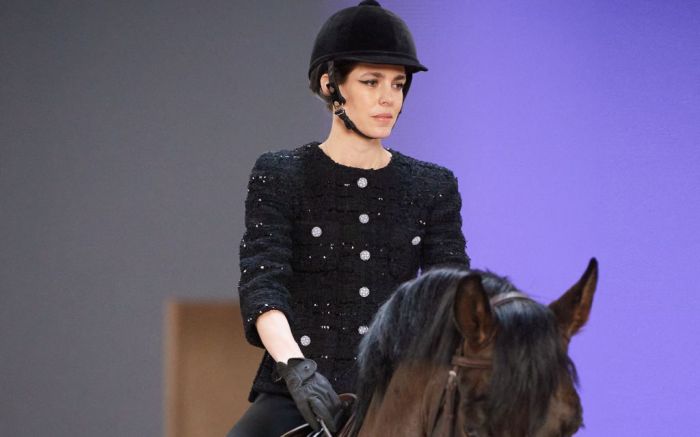 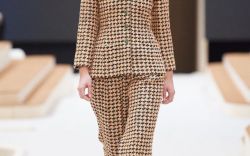 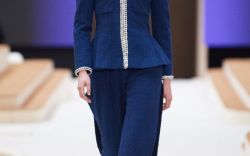 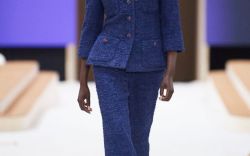 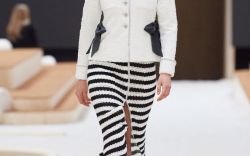 Since the death of Karl Lagerfeld in 2019, Chanel’s runway shows have been a bit more demure. Save for a rogue runway crasher at the spring ’20 show — with Gigi Hadid as impromptu bouncer to save the day — the French fashion brand’s presentations have been a bit quieter under both the direction of creative director Virginie Viard and the necessary restraints of the pandemic.

That’s not the case for this couture season, though. To kick off the spring ’22 couture runway show on Tuesday at Paris Fashion Week, Viard sent an actual horse down the runway. And it wasn’t just any model handling the animal, but none other than Charlotte Casiraghi.

The Monaco royal, who is the granddaughter of Grace Kelly, happens to be an expert equestrian and a longtime friend of the brand, to boot. The image of Casiraghi on horse — wearing a black tweed suit detailed with jeweled buttons and accented with a wool felt riding cap and and leather riding gloves — was part of Viard’s overall vision for the collection, in creating a visual universe that incorporates many of the long-held design codes of the brand.

“The idea for the show’s décor came from a longstanding desire to work with Xavier Veilhan,” said Viard in the show notes. “His references to constructivism remind me of those of Karl Lagerfeld. In addition to creating the show décor with its references to the avant-gardes of the 1920s and 1930s, Xavier wanted to work with Charlotte Casiraghi. His artistic universe is full of horses and Charlotte is a skilled rider.”

This Chanel “universe” inevitably included a lot of tweed. Much of the collection was devoted to the signature Chanel fabric, done in modest pantsuits with relaxed trousers and longer jackets, a seemingly appropriate silhouette for a couture clientele that skews older.

On foot, an equally modest Mary Jane-meets-ballerina style provided a secure silhouette, and it was paired with both the tweed suits and Chanel’s lineup of evening wear, done mostly in black with embellishments here and there. It was also seen in a spectator style on the collection’s last look, a modest bridal gown.