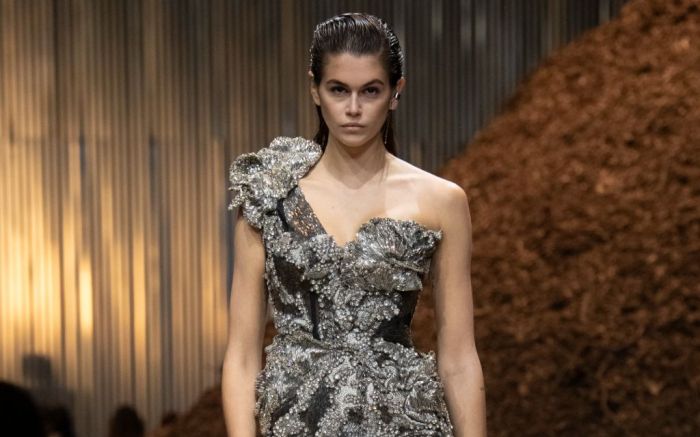 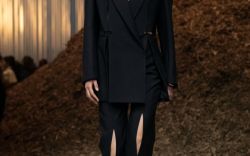 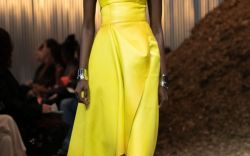 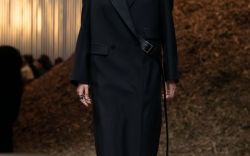 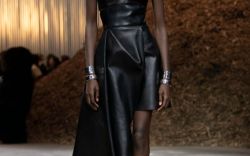 Call it reverse pond-jumping. In a continuing trend of European fashion houses making their way to the U.S. to show new collections, Alexander McQueen presented its fall ’22 women’s line Tuesday night in New York, showing a tailored but colorful collection of psychedelic-infused details to complement a nature-inspired setting in inside a Brooklyn warehouse location.

But it wasn’t the first time that McQueen has come stateside. Back in 1996, founder Lee Alexander McQueen initially brought his collection to New York in 1996 and then again in 1999 for his spring-summer 2000 “Eye” collection, with a show the happened to occur during a torrential downpour, causing the runway to flood with several inches of water for the models to walk through.

The skies were clear at the brand’s Tuesday night show, but the elements were still in play, with piles of dirt and mulch filling the industrial space. The collection was titled “Mycelium,” referring to the a root-like fungus system underground that can connect plants and organisms to each other through a network of fungal colonies. It was all a little in the scientific weeds — except that the resulting collection was full colorful, vibrant pieces that alternated between strong tailoring and stronger ruffles, all with a little bit of magic-mushroom psychedelia in the detailing.

Bright suiting was reminiscent of McQueen’s legendary spring ’99 collection that had model Shalom Harlow wearing a belted strapless ruffled dress on a turntable as both she and the garment were being spray painted. (Upon closer inspection, the new spray painted pieces were done in abstract figures.) Bright strapless dresses in orange, yellow, lime green and red had raw hems fanning out from their ruffles, while a few knitwear pieces depicted actual mushrooms in acid colors.

Footwear included the brand’s standard biker-chic mix of black leather, silver metal buckles and other tough metal accents. But it also veered into the psychedelic, with a series of fringy ankle-strap, pointed-toe pumps done in the same vibrant colors and with a whole lot of texture. Not quite the statement shoes of McQueen’s Armadillo days, but a welcome addition to the armor-like black boots and dress shoes that brand has pushed lately.