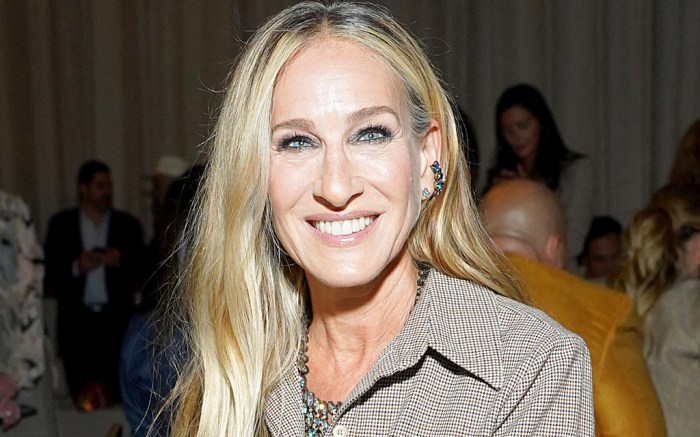 Fendi Baguettes are officially back — just ask Sarah Jessica Parker. The actress’ new four-piece Baguette collection made its official debut on Thursday afternoon, thanks to the power of fashion and social media.

In a fashion lover’s dream union, the Italian label has tapped Parker as the designer of a degradé sequined collection, each bag cast in respective hues of light purple, pink, wasabi green and blue. Though the line’s secretly been under our noses for months, Parker posed with each style in a new series of Instagram photos on Thursday afternoon — giving it a particularly stylish public launch.

For a customizable touch, each Baguette includes a respectively hued rhinestone-lined “FF” buckle, which is interchangeable across each style to suit its wearer’s mood. Enhancing this feature is an extra set of sculpted buckles — each in a monochrome palette that matches each bag — lined with sphere accents for a whimsical finish. All are currently available, along with their respective Baguettes, in select Fendi boutiques.

As for the bags’ not-so-secret status? You can thank Kim Jones, Fendi’s women’s artistic director. Parker’s capsule virally made its splashy debut on his runway at the brand’s 25th-anniversary Baguette fashion show during New York Fashion Week in September. Though their partnership was unknown at the time, Parker subtly wore the collection’s purple iteration — vibrantly paired with its green buckle — in the front row.

Fittingly, the actress’ relationship with the Fendi Baguette can be tracked across its entire 25-year history — even back to its debut in the late ’90s, when she acquired her first. Particularly while leading “Sex and the City” from 1998-2004, Parker became synonymous with the handbag when a robber stole it in the show’s third season, pleading “It’s a Baguette” when the thief simply deemed it a “bag.” (a statement cleverly reinterpreted in print within the 2022 capsule’s packaging, as well).

In the years since, Parker’s also guest-designed a Baguette to be auctioned for the Brain Trauma Foundation, starred in the memorable 2019 #BaguetteFriendsForever campaign and co-created a pink sequined iteration for “And Just Like That…” last year. Perhaps you could say her Baguette collection is cosmic fashion fate.

Though it’s unclear where Parker’s Baguette collection will be seen in the coming days, the launch is surely not the last we’ll hear of it. After all, the “Failure to Launch” actress is currently filming the second season of HBO Max’s “And Just Like That…” across Manhattan, timed for an early 2023 release. And just like Parker’s imminent onscreen return, these Baguettes will surely continue an upward trajectory in their rightful place — the crook of Bradshaw’s stylish arm.