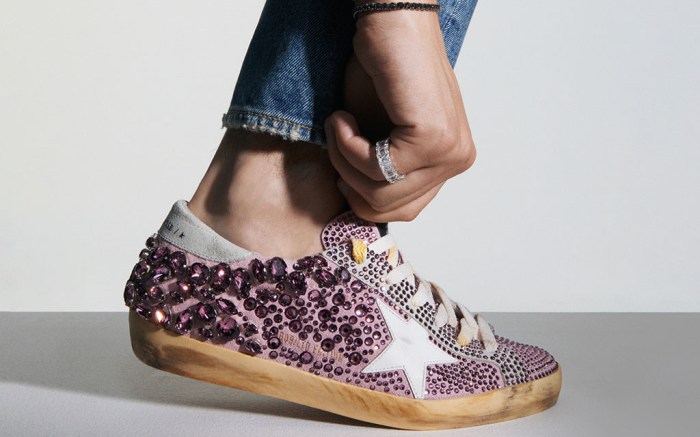 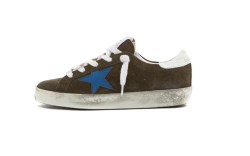 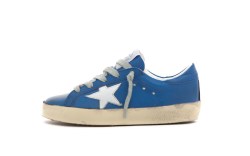 Golden Goose’s edgy collegiate sneakers are getting a glamorous boost this season, courtesy of Swarovski.

In their new limited-edition collaboration within its Swarovski Creators Lab, the Austrian crystal brand has partnered with Golden Goose to revamp its hit low-top Super-Star sneakers, featuring the skate-inspired pair’s signature low-top uppers with star accents, beige laces and streaked rubber soles. Giving the sets a burst of Swarovski glamour is an allover coating of embroidered Swarovski crystals.

The sparkling style will come in two colorways, each available in men’s and women’s sizing. The first, limited to 250 pairs across Swarovski and Golden Goose’s websites and select boutiques, features white uppers with gray stars and panels. The $2,320 pair is complete with allover white Swarovski crystals. A second $2,320 style — further limited to 100 pairs, and available only on Swarovski’s website and stores — includes light pink uppers with white stars, covered in gleaming pink crystals.


Adding a cheeky touch to the collection is a $6,300 skateboard, inspired by Golden Goose’s signature flag. The piece features a black and white striped underside covered in Swarovski crystals. The interactive accessory will be limited to 10 pieces.

The new launch follows a runaway year for Golden Goose, which has included the release of its glamorous holiday campaign and 100% vegan Mid-Stardan and Yatay sneakers, crafted from biodegradable and animal-free materials. The season has also proved a popular one for Swarovski, as well, which launched a colorful heeled sandal collaboration with Aquazzura and a viral holiday campaign starring Bella Hadid in recent months.