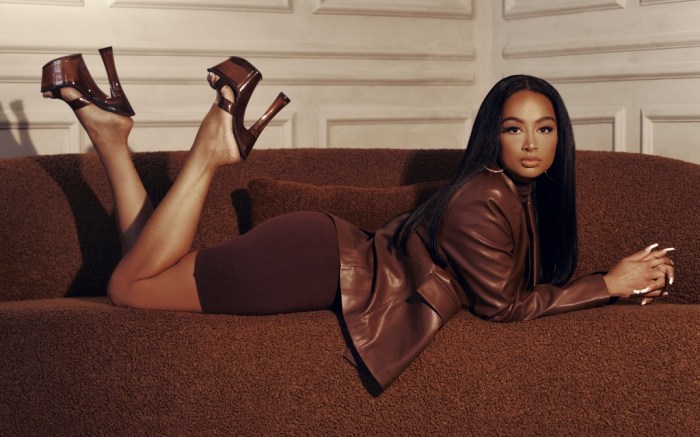 If anyone knows a thing or two about heels, it’s certainly Femme. Known for its sleek celebrity-beloved lace-up stiletto sandals and mules, the brand has grown rapidly in the last several years during the high heel renaissance. Today, the Los Angeles-based label launched its new collaboration with actress and socialite Draya Michele, who also stars in the accompanying campaign.

Tapping into its own heritage, Femme featured new versions of its signature pointed-soled lace-up heels within its Draya x Femme. Topped with thigh-high lace-up straps and thin toe straps for a sultry appearance, the $199 Miller sandals feature stiletto heels for an added height boost — and comes in a palette featuring black, denim and zebra-striped tones.

The brand also revamped its’ slip-on mules for the collaboration, releasing a $189 Robidas mule with thin heels, pointed soles and rounded toe straps. The pair’s difference is in its’ single tone — a black-and-white zebra striped print, giving the slip-on shoes dash of truly wild style.

Femme’s collaboration with Michele is rounded out with a third shoe, also marking its debut into platform heels. The new $199 Natale mule is a slip-on style, featuring thick clear platform soles and matching heels. Adding to the set’s allure are crossed glossy toe straps, giving it an instant Y2K-worthy twist — as well as a palette of clear, black and chocolate brown hues for added versatility.
The collaboration launch is the latest for Femme Los Angeles, which has expanded its shoe offerings and celebrity presence in recent years with stars including Jennifer Lopez, Lori Harvey, Hailey Bieber, Emily Ratajkowski and Megan Fox. The brand has also established itself as a leader in ethical footwear, crafting all of its materials from vegan textiles.
Discover how high heels have evolved over time in the gallery.