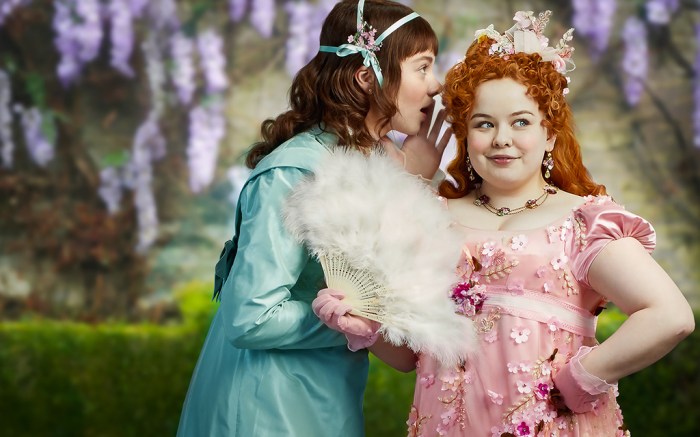 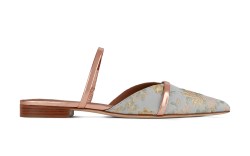 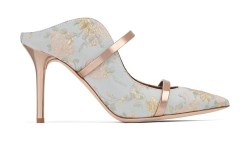 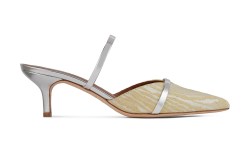 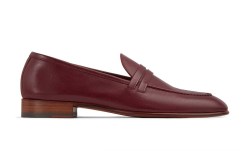 Lady Whistledown has news to report: “Bridgerton” and luxury label Malone Souliers have teamed up for an exclusive collection of shoes.

In August last year, Netflix and Shondaland — the media company behind “Bridgerton” — announced their partnership with the footwear brand. And now the exclusive 14-piece capsule inspired by key looks from the hit series is finally here.

Fans of the show and of the Regency-era can expect intricate jacquards, including a pale shimmering blue floral design for Daphne Bridgerton to a yellow moiré for Penelope Featherington, satins, dramatic feathered plumes and ball-worthy embellishments throughout the collection.

The Marguerite, for instance, is seen in lace mesh and delicate velvet bow embellishment.

Then there’s the embellishments in the Marion slingback — now designed with an abundance of crystal-studded organza flowers.

Plus, the Sonia sandal, gives us a sneak peek into Season 2, featuring a plume of electric blue feathers inspired by the beautiful hats featured in the new season of the show.

The capsule — available now on malonesouliers.com and at the Malone Souliers boutiques in London and in the Villaggio Mall in Qatar — will see Malone signature styles re-imagined for both men and women.

“Bridgerton” first premiered in December 2020 and immediately took off in popularity. Aside from steamy scenes, soapy drama and its talented cast, the show’s costumes were a major draw for fans. The show has since turned into a pop culture phenomenon — so much so, many brands have dropped “Bridgerton”-inspired collections, such as Aerosoles, H&M x Simone Rocha and more.

Season 1 of the series was watched by a record 82 million households around the world — making it the most-watched Netflix show ever. And season 2 is just around the corner. New episodes will premiere on Netflix on March 25. That’s just enough time for shoppers to nab a pair of shoes from the Malone Souliers collaboration.

“[‘Bridgerton’] revisits the past with a sense of revolution and joy, which is exactly how I approach shoemaking,” said Malone Souliers creative director and founder Mary Alice Malone. “This partnership has been fascinating from a design perspective, allowing us to embrace the pomp and unabashed splendor of Regency fashion. But it also has felt like such a natural fit. I’m always inspired by the creative possibilities we can find in our past, but, also, the importance of always being innovative and daring in my work. For me, ‘Bridgerton’ sums up both these impulses — and has a lot of fun doing it. I can’t wait to see where the partnership will go next.”

The collection can also be found in stores at a “Bridgerton”-inspired pop-up shop at Bergdorf Goodman New York, at Bloomingdales in New York, Dubai and Kuwait, Harvey Nichols’ Dubia, Kuwait and Riyadh, along with Tryano Abu Dhabi, Kalogirou Greece and Flannels U.K.