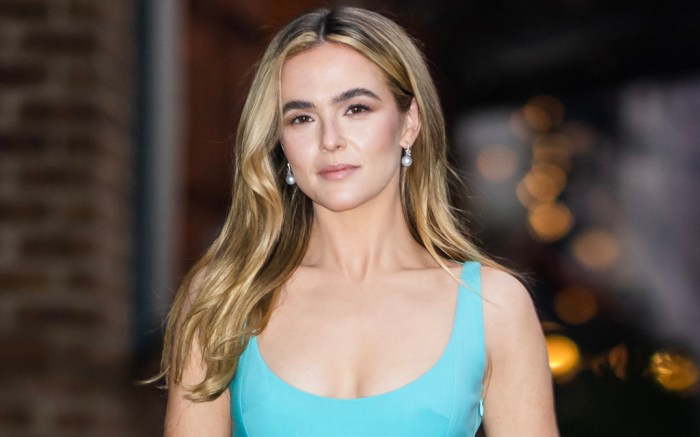 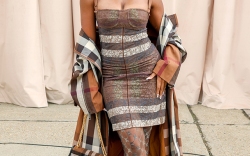 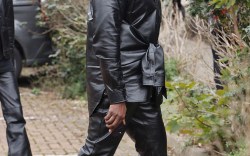 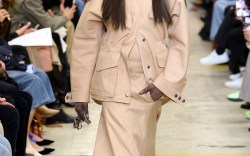 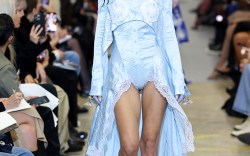 Zoey Deutch was spotted out for a stroll early this morning in New York, making her way to the “Live With Kelly and Ryan” studios. The actress is currently on a press tour for her new film, “Something From Tiffany’s.”

The “Vampire Academy” actress’ dress was a simple a-line style with a fitted strappy scoop neck bodice that gave off the illusion of a corseted waistline thanks to the garment’s tailored nature. The fitted bodice gave way to a lengthy free-flowing skirt with a few defined darts running down the front. Deutch accessorized with dazzling Tiffany & Co. earrings.

Deutch hit the city streets in strappy Andrea Wazen sandal heels in a stark blue to match her dress. The heel itself was skinny and long while the toes were pointed. Thin crystalized straps ran across the top of Deutch’s feet and up and around the ankle for a leg-climbing look.

When it comes to shoes, Deutch often wears sleek heels on the red carpet. The “Not Okay” actress can regularly be seen in pointed-toe pumps by Roger Vivier, as well as platform sandals by Giuseppe Zanotti, Stuart Weitzman and Christian Louboutin. When off-duty, she wears Veja, Nike, and Converse sneakers, as well as sandals by Prada and Birkenstock. Deutch is also a fashion world fixture, appearing in Fendi’s debut Peekaboo handbag campaign and front rows for brands like Tory Burch, Dolce & Gabbana, Versace, and more during Fashion Month.