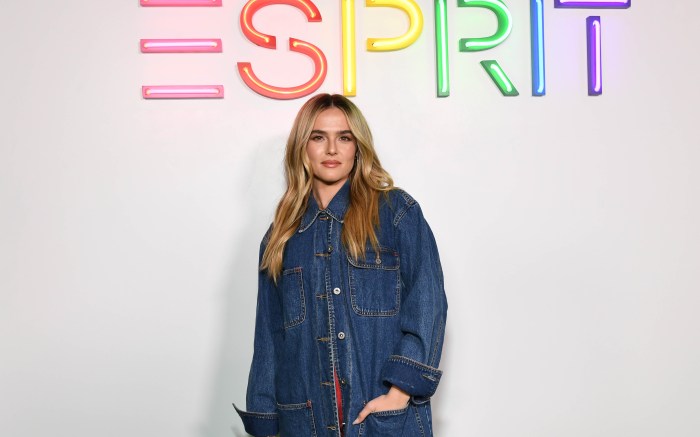 Esprit hosted an exclusive launch party at its first-ever North American pop-up store on Robertson Boulevard in Los Angeles last night. The pop-up opening marked the first physical United States retail store for Esprit since 2012 and coincided with a relaunch of the brand’s e-commerce site. The pop-up will carry the brand’s current collection as well as special capsule collections that will launch throughout the season.

Zoey Deutch was among the many stars to make an appearance at the event. The “Vampire Diaries” actress took a sleek approach to style with edgy accents for the launch. Deutch posed for photos in a denim overcoat that had a sharp collar with oversized pockets and thick cuffs.

Underneath she wore a simple black top and added a pop of color to her look with coral pants. Deutch opted for minimal accessories and styled her blond tresses in loose waves.

When it came down to shoes, Deutch completed her look with a pair of black ankle boots. The silhouette had an elongated pointed toe and a rectangular heel.

Deutch often steps out in sleek shoes. The “Not Okay” star regularly wears pointed-toe pumps by Roger Vivier, as well as platform sandals by Giuseppe Zanotti, Stuart Weitzman and Christian Louboutin. When off-duty, she will likely complete her looks with Nike, Veja and Converse sneakers, along with sandals from Prada and Birkenstock.