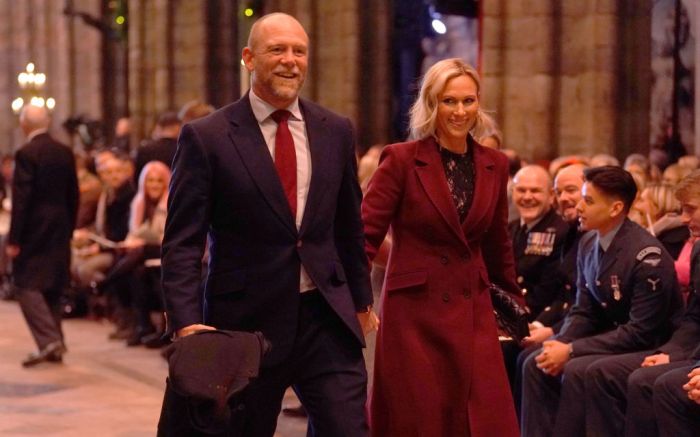 Princess Anne’s daughter Zara Tindall joined the royal guests at the “Together at Christmas” carol service in London on Dec. 15. The event, held at Westminster Abbey in London, is a holiday special hosted by Kate Middleton, Princess of Wales, and attended by royal family members including Prince William, Camilla, Queen Consort and King Charles III.

For the ceremony, Tindall wore a black ribbed dress with a colorful floral print, which she covered up with a burgundy wool coat. She added sheer black stockings to the look.

To accessorize, Tindall opted for a pair of sparkling earrings and a black quilted clutch with a gold clasp. She kept her platinum blond bob in a softly waved style complimenting her minimal makeup that featured a glossy lip.

Her husband, Mike Tindall, coordinated with her ensemble by wearing a white button-down shirt and a burgundy tie. He layered the shirt with a lengthy dark blazer that featured gold buttons. The former rugby player paired the look with tapered dark blue trousers.

The Olympian completed her look by slipping into black pumps. The sleek silhouette featured a pointed toe. The pumps added height to the look with a stiletto heel that was about 3 inches tall.

The last time we saw the couple together was in more somber attire attending Queen Elizabeth’s funeral back in September.