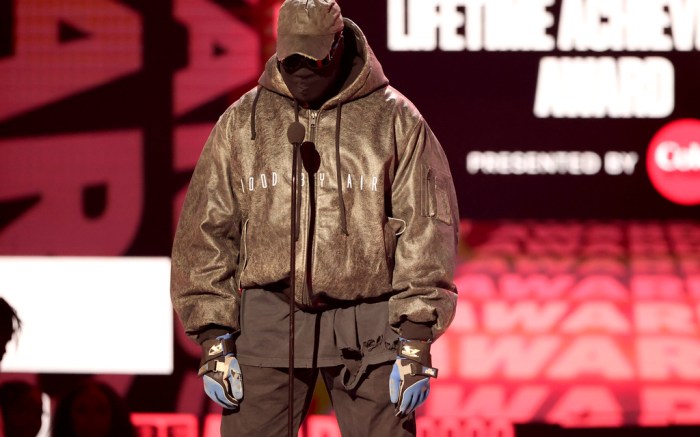 The BET Awards is a celebration of Black culture and excellence, which makes the award show an all-out style event for the biggest names in Black entertainment. While the BET Awards red carpet is always graced with incredible fashion statements, not all the looks make the mark — at least when it comes to the critical eye of Twitter.

From dramatic shoulder pads to feathered green boots to just Ye in general, check out some of the 2022 BET Awards’ worst looks — according to Twitter — below.

Kanye West — or Ye — didn’t walk the BET Awards red carpet, making a surprise appearance during the live telecast to pay tribute to Diddy, who revived a Lifetime Achievement Award. Ye wore a black ripped tee under a Hood By Air leather jacket and a pair of black trousers, which were tucked into comically large snow-like boots. Most noticeably, The ever-polarizing rapper and fashion designer wore a full-face black mask, a black baseball cap, and motorcycle gloves, obscuring his entire form. One Twitter user commented Ye looked like was at risk for “asphyxiation, heat stroke and immobilization from those shoes, jacket and face mask.”

#BETAwards #KanyeWest about to fall down flat from asphyxiation, heat stroke and immobilization from those shoes, jacket and face mask pic.twitter.com/9QchE12NKD

Best New Artist winner Lato wore a Mugler look to the BET Awards, which consisted of a nude corseted mini dress with a sheer wrap overlay. Lato paired the look with nude mid-calf boots that were more like a stiletto sandal-boot hybrid. The star wore chunky acrylic bracelets and massive white hoop earrings, having to loop her arms through the statement earrings. One Twitter user commented on the look, saying, “I know y’all had to see those damn shoes Latto had on man. Hollering!” Another added, “Why did Latto wear those earrings and those shoes? Girl can barely stand.”

Why did Latto wear those earrings and those shoes? Girl can barely stand lol #BETAwards

Billy Porter is always one to experiment with fashion. For the BET Awards, the actor wore a two-piece slate gray Rick Owens look consisting of a long avant-garde sweater with dramatically lifted shoulders and a form-fitting floor-length skirt. The look also included futuristic gray suede ankle boots with clear acrylic heels with a gray statement toe plate. One Twitter user commented, “Those shoes about to take Billy out.” Another added, “Billy Porter about to start flying across the stage,” posting a side-by-side of the actor next to a bat.

Those shoes about to take Billy out 😂😂😂 #BETAwards

Rapper Saucy Santana wore a stylish Area plaid blazer dress in yellow and green to the BET Awards, which featured dramatic hips and impeccable tailoring. While most armchair fashion critics loved this portion of the rapper’s look, his footwear choice caused some pause. Saucy Santana wore knee-high green and yellow feathered boots, which many likened to children’s television show characters. Some Twitter commenters compared the boots to Brobee from Yo Gabba Gabba. Another added, “Saucy Santana looks like a mix of ‘Clueless’ and Oscar The Grouch.”

In one of the most polarizing looks of the night, rapper Summer Walker wore a custom Laurel Street two-piece gold outfit to the BET Awards, which featured a risqué harness top, gold-plate pasties, and a gold coin and chain mini skirt. The extreme look quickly went viral on social media, sparking a heated debate over Walker’s fashion merits. One Twitter user commented, “I’m convinced Summer Walker doesn’t have a stylist cuz what the hell is this.”