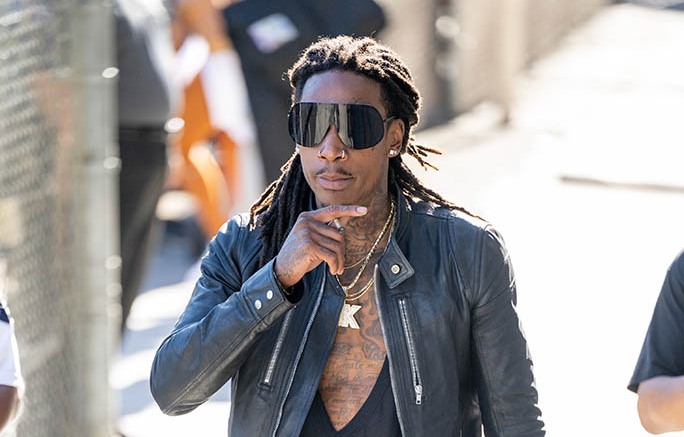 Wiz Khalifa looked like a full fledge rockstar while arriving at “Jimmy Kimmel Live!” in Los Angeles on Tuesday. The “Black and Yellow” hitmaker joined Anthony Anderson to talk about his new album “Multiverse,” which will be available July 29, his love for cannabis and portraying funk legend George Clinton in a new film.

“The film is great. The story that they are telling is great. The actors on there are amazing. It was just fun to be apart of it. They really wanted to be myself but as him. And I got to meet like some of his grandkids, they were just telling how much I reminded them of their grandad. So it was just fun as hell to be there and be on set,” Khalifa explained.

Khalifa went full monochrome in an all-black outfit as he made his way into the studio. The “See You Again” rapper wore a leather motorcycle jacket over a simple black T-shirt, which included a deep V-neckline. He completed his look with dark denim jeans and carried a black handbag. Sticking to a street style aesthetic, Khalifa accessorized with oversized shades, diamond earrings and layered necklaces.

When it came down to footwear, the “Young, Wild & Free” artist tied his look together with the Nike Blazer Mid ’77 Vintage Sneaker. The sleek style sports a streamlined profile and autoclave sole. Pops of fuzzy suede and a raw-edge foam tongue add standout details that honor the shoe’s vintage roots.

Although Khalifa initially arrived in a black shirt and sneakers. He eventually changed into a white top, which he wore under his jacket and leather boots.

Khalifa has continued to make waves in music and fashion throughout his career. He is most noted for staying true to his signature skinny jeans, unbuttoned shirts in crazy prints and undying love for Gucci footwear. His red carpet also deserves recognition as he’s known to step out in tailored suits, which he usually complements with a bevy of blinged out jewels and other custom elements.